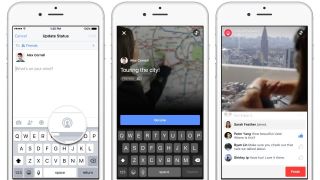 Facebook's focus on video remains strong as it begins rolling out its Periscope-rivaling feature to iPhone users in the United States today.

The new Live Video feature can be accessed through the Update Status option and selecting icon for Live Video. You can whip up a short description before starting your stream.

To start broadcasting, just tap "Go Live." While recording, you can see how many people are watching, who they are and any comments they leave.

Once you've finished a live stream, it's saved to your Timeline, though you can delete later if you want.

Similar to YouTube, Twitch and other services, you can also subscribe to other people if you wish to be notified whenever a new stream is going live.

Now, with the expansion of Live Video to more than a certain subset of users, Facebook appears ready to take on rival social media platforms - namely, Twitter-owned Periscope. Twitter bought the livestreaming service before it even launched, clearly aware of the power of moving pictures and people's desire to broadcast their every move to the world.

Periscope is available on iOS and Android, so it has Live Video beat there, but not to worry for Facebook. While it's only available to US and iPhone users starting today, Facebook said Live Video will come to Android soon as well as roll out to the rest of the world in the coming weeks.