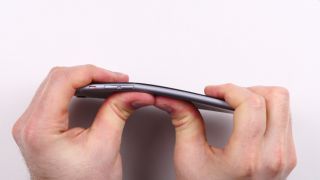 You'd think after the 'bendgate' controversy last year that Apple would shy away from the idea of bendable iPhones, but new patents have come to light that show that the Cupertino company has been considering flexible electronic devices.

The patent, which was awarded on January 6 2015 and filed in September 2011, shows that Apple has been exploring ways to create an electronic device that has a flexible display that can be folded to make an even smaller handset without damaging the screen or components.

With the LG G Flex 2 impressing people at CES 2015, there's clearly an interest in smartphones with curved or bendable screens and bodies, so it makes sense that Apple is also looking into the technology.

According to Apple's patent, the advantages of flexible electronics include allowing handsets to "be more resistant to damage during impact events such as drops because the flexible device may bend or deform while absorbing the impact".

An iPhone with a flexible build would also come with a new user interface that would take advantage of the flexibility. As Apple Insider notes, this could include the ability to physically squeeze the handset to turn it on or off.

Although Apple has recently been awarded the patent, we're unlikely to see an iPhone that's supposed to bend any time soon, but the thought of Apple applying its innovation to flexible electronics is an exciting one indeed.