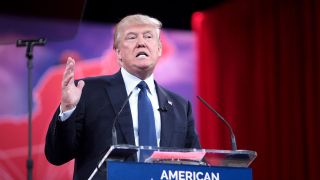 US presidential hopeful Donald Trump has called for US citizens to boycott Apple until it complies with FBI demands that it create a backdoor into the iPhone.

"Boycott Apple until such time as they give that security number," he said to crowds during a rally in South Carolina, presumably referring to the passcode of the iPhone 5C used by one of the shooter's in the 2015 San Bernardino terrorist attack.

Trump's call comes after Apple CEO Tim Cook wrote an open letter to customers slamming a court order that would force the company to create a special version of iOS to access the iPhone. The software would, in part, allow for many passcode attempts without wiping data off the device.

Since the publication of Cook's letter, numerous tech companies and leaders have added their support to Apple and decried the government's request.

Trump, however, is not one of those people.

"I use both iPhone & Samsung. If Apple doesn't give info to authorities on the terrorists I'll only be using Samsung until they give info," he tweeted Friday, making a point to say he uses both because, it turns out, he had been tweeting from an iPhone.

"Hopefully others will follow suit," he added. "Our country needs and should demand security. It is time to get tough & be smart!"

He followed up with yet another tweet reiterating his message, "Boycott all Apple products until such time as Apple gives cellphone info to authorities regarding radical Islamic terrorist couple from Cal."

There's a lot of things wrong with what Trump is saying, not least of which being what the FBI is even asking Apple to do, but we'll focus on a few other things.

Trump has seemingly missed the fact that his Samsung phone, which he intends to switch to as part of his Apple boycott, undoubtedly runs Android.

Sundar Pichai, CEO of Google, maker of Android, has made his support of Apple's stance on the issue very clear.

Not only that, but Jack Dorsey, CEO of Twitter - a social media platform that looks to be one of Trump's favorites to spread his opinions and presidential promises - also put his support behind Apple's fight this week, saying that he stands with Cook on the matter.

Apple doesn't seem too worried about Trump's call for a boycott. As reported by Reuters, senior Apple executives said "they felt they were in good company given the other groups and people Trump has criticized in the past."