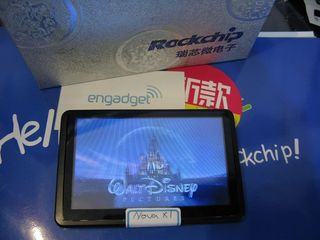 The forthcoming Android 3D tablet shows off its tech

If you've used the iPad before but wept at the sheer lack of perceived depth on offer, then IFA could hold the answer for you.

Not as a tablet you'll be able to buy soon (boo) but engineering firm Rockchip will be showing off its lenticular tablet technology that could make a boring tablet 3D-enabled without glasses (yay!).

The tech would also allow you to watch movies in 2D as well, at the flick of a switch, making it a dual purpose device.

It's currently at the engineering stage at the moment, but Rockchip is apparently looking to create its own Android tablet to bring to market - presumably to then be re-badged by a larger manufacturer.

While autostereoscopic technology offers an inferior performance to the stereoscopic elements used in today's 3D TV, the ability to not wear 3D glasses on the tube while indulging in a spot of Toy Story... we mean, football or films with stuff blowing up, on the tube would be worth the drop in quality.

However, the issue of price also rears its head - will Rockchip be able to make the Android 3D tablet cheap enough to go glasses-free, given that TVs using the tech have required a high premium?

We'll be there at IFA to check out all the latest gizmos, and if this catches our eye (provided we stand in precisely the right place) we'll tell you all about it.

Via Crunchgear from Engadget China