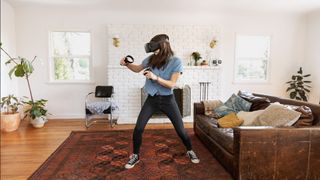 The more advanced Oculus VR headsets, the Oculus Quest and Oculus Rift S, have got a boost to their hand-tracking capability, after a July firmware update.

Both the Quest and Rift S use mounted cameras on the front of the headset to track the position of your hands in the outside world, in order to translate your movements effectively – into whatever VR games you're waving, wading, or saber-ing through in the comfort of your own home.

But that means the camera needs a clear view of your hands and the controllers you're holding, which can get tricky when you're swiping the air out of view or bringing your hands too close to the headset.

Oculus' blog post said that "We’ve fine-tuned our Oculus Touch controller tracking algorithms to improve accuracy for certain poses, like when your hands are close to the headset or angled away from it."

Oculus claims the update should lead to "smoother tracking and fewer errors" for both the Quest and Rift S.

It's no surprise to see Oculus seeking to give its VR headsets any advantage it can, given how competitive the market has become. HTC still leads the way with the Vive and Vive Pro, but Oculus has managed to offer a slightly cheaper alternative that may have larger mainstream appeal in the long run.

The main thing holding back the Rift S, of course, is that it still requires tethering to a PC with a wired cable, though you'll get more powerful processing than with the untethered wireless Oculus Quest.

We were sad to not see a more advanced Oculus Rift 2 model that really tried to push the limits of VR hardware, but even these small improvements to the user experience are going to help early VR adopters, and that seems like a move in the right direction.