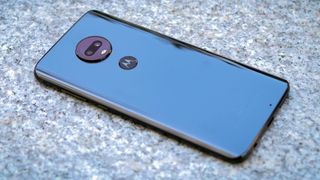 In 2019, we saw a new series of Motorola phones emerge, with the Motorola One line (consisting of that phone, the One Vision, One Action, One Zoom, and One Macro) providing high-end camera features on budget phones. It had people asking, 'what does this mean for the Moto G range?' – but it seems Motorola's most popular series could actually steal Motorola One features.

That's according to a leak regarding the Moto G8 Plus, from German site Winfuture, which details the upcoming phone's specs in great detail, along with images. Pay close attention to the camera features, and you may start to notice a few familiar faces.

The main camera (of three, over two in the Moto G7 Plus) is said to be a 48MP snapper – the Moto G series hasn't had a sensor of this resolution before, but some Motorola One handsets, such as the One Zoom, do.

The next camera is a 16MP ultra-wide snapper, with which you can film video while holding the Moto G8 Plus vertical, and it will come out in horizontal. Does that sound like a crazy feature to you? Motorola One Action fans will recognize the description, as that was the titular camera (and feature) on that handset.

The third camera is a 5MP depth sensor, as found on the Motorola One Vision, but that was also present on the Moto G7 Plus, so it's less of a wild new addition than the other cameras.

Joining it is a laser autofocus system, which looks like a fourth camera on the back of the handset, but it's actually not. It's useful for, as the title suggests, snappy autofocus.

Then, around the front, there's a 32MP selfie camera. That's almost three times the resolution of the 12MP front-facing camera in the Moto G7 Plus, but only a hair above the 25MP of several of the Motorola One handsets. It's looking likely then, that Motorola realized the popularity of powerful cameras to take selfies with.

By looking at the three rear cameras and one front-facing camera, it seems that Motorola has copied the popular camera elements from its Motorola One series of handsets, and brought them to its 'main' series of phones, the Moto G devices. But there's a lot more to the Moto G8 Plus leak than that.

There's more than the Moto G8 Plus camera

The Winfuture leak details a lot about the Moto G8 Plus – almost everything in fact. It seems set to have a 6.3-inch display with a 2280 x 1080 resolution, and it's broken up by a small central notch.

Inside the handset there will apparently be a Snapdragon 665 chipset, a mid-range processor that's a little bit more advanced than the Snapdragon 636 in the G7 Plus. This will be accompanied by 4GB of RAM and options for 64GB or 128GB of storage space.

The Moto G8 Plus battery will apparently be 4,000mAh, a healthy step up over the 3,000mAh in its predecessor, and will supposedly be chargeable through an upgraded version of Motorola's TurboPower charger, although its exact charging speed hasn't been listed.

Of course this is all a leak right now, so take it with a pinch of salt, but it does provide an interesting look at the possible Moto G8 Plus.

So when should we expect the Moto G8 Plus launch date to be? We'd say early 2020, as Motorola usually launches its G series at the beginning of the year, but the leak actually suggests it will launch in Brazil on October 24.

We won't have long to wait to work out if that turns out to be true, so head back to TechRadar then to check the validity of this leak.