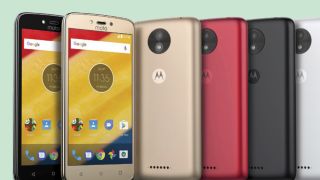 Is the Moto G5 Plus, Moto Z, Moto X or the rumored Moto E4 not enough variety for you? Well, how about the Moto C?

According to VentureBeat, Moto is said to be releasing a new duo of devices that hones in even more on the budget crowd.

The Moto C and Moto C Plus, which sound a lot like “Moto Z” when you say them out loud, are said to borrow the stylings of the recent Moto G5 smartphone. As such, the leak teases that we’ll find the metallic trim stretching around the phones’ bezel and a circular-shaped camera system around back.

However, there appear to be some changes compared to the current G-series of smartphones. Most obvious is its lack of fingerprint sensor. From a cost-cutting perspective, it’s easy to see why this didn’t make the list. Next up, Moto went with capacitive buttons near the bottom instead of on-screen buttons.

Mysteriously, the speaker located on the back looks almost exactly like the MotoMod connecting port that we’ve seen on the Moto Z family of smartphones. That’s sure to confuse some people if this leak turns out to be true.

Power on a budget

Both the Moto C and Moto C Plus are rumored to boast 5-inch displays and microSD slots, and while splitting the series into two separate models might make you think that there are any more physical differences to speak of, there aren’t. To find them, you’ll have to look inside the phones.

Allegedly, these new budget phones from Moto feature Android Nougat and MediaTek chipsets, but they diverge at screen resolution — 854 x 480 and 1,280 x 720 on the Moto C and Moto C Plus, respectively.

Moto is said to be sticking to quad-core chipsets all around, but the speed will vary depending on your region. If battery is a concern, the Plus looks to remedy your worries with a 4,000mAh battery, while the C looks to get the job done with 2,350mAh.

Lastly, rumors point to the Moto C being stocked with a paltry 1GB of RAM and the Moto C Plus will come in 1GB and 2GB of RAM variations depending on your region. Also, both phones are said to be available with 8GB of onboard storage, with the option for 16GB appearing in select regions.

While the leak is quite detailed, we won’t know if the Moto C is indeed real until we hear straight from Lenovo or Motorola itself.

The Moto G5 might be cheap compared to many of the best phones out there, but starting at $210 (£170/AU$275), it’s certainly still out of the question for some.

This leak of the Moto C didn’t talk price, but given the specs, we can confidently state that these phones will likely debut, at most, for $100. If Moto went lower, that would obviously be wonderful for all involved, especially given that some of the best cheap phones easily outclass the rumored specs at the $150 price level.