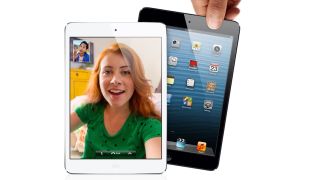 The iPad mini has officially gone on sale today and despite the usual pre-order scramble, Apple fans have been less inclined to queue for the cut-down tablet.

Reports from around the world have confirmed that the launch-day hoopla for the iPad mini has been more muted than for previous iPad launches.

In London, just a handful of tech fans queued for the flagship Covent Garden Apple store's 8am opening while The Mirror reports that only 30 people showed up in Hong Kong.

Tokyo was a bit more bustling, the paper says, but even its 300-strong crowd was nothing compared to the throngs that turned out for the iPad 3 and iPhone 5.

Why why why, Delilah?

Perhaps being able to hold it in one hand isn't the key selling point Apple thought it would be.

Other factors affecting the turn-out could be the weather and the fact that it's November, when shoppers' thoughts turn to Christmas and gifts for others rather than ourselves.

But perhaps it's also down to the less-than-gushing press Apple has received over iOS Maps, its sore-loser Samsung statement and corporate reshuffle. Maybe people are beginning to tire of the cult of Apple. Maybe fanboys have learned how to pre-order.

Who knows. The lack of queues isn't likely to hurt the iPad mini's sales much, with the 7.7-inch tablet offering the same dual-core A5 chip found in the iPad 2 at a fairly low price point for an Apple product.

Also on sale today is the new iPad 4, which replaces the old new iPad.