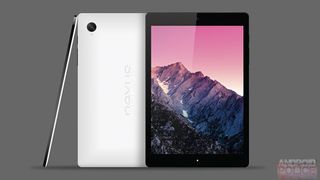 A Nexus 9 mock-up render based on a screenshot

HTC has built the next Google Nexus tablet, according to leaked specs and images published this weekend.

Android Police has obtained information about a so-called Nexus 9 tablet codenamed 'Volantis' with an 8.9-inch display with a 2048 x 1440 display.

Also listed is a zero gap aluminium construction, stereo front-facing speakers, up to 32GB of storage with 8-megapixel and 3-megapixel cameras.

An HTC Nexus tablet could be the last given speculation that Google is preparing cash in its chips on the Nexus brand.

Instead, it is thought the company is preparing to launch an Android Silver program to focus on 'pure Android' devices like the Google Play Editions of popular phones, while offering a premium customer experience.

If and when this Nexus 9 will be released is unclear, but the report says a launch at this week's Google I/O conference is unlikely, but it may come before Christmas.