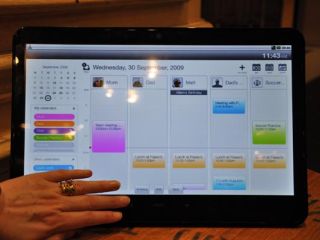 Away from the CES 2010 show floor, T-Mobile gave us a sneak peek at a product that will be coming later in the year: an ultra-thin 15" Android touch screen tablet codenamed Vega.

This isn't just another Android device for the sake of doing something that isn't a PC or a tablet to take advantage of the hype about whatever Apple might or might not launch; while it's got a web browser and it will play YouTube videos and work with BBC iPlayer, the main application is a shared family calendar for getting everyone organised. And who would buy that?

Busy mums who usually have to keep track of school events, holidays, dentists appointments and the rest and remind the rest of the family about them and who wouldn't run upstairs to check an online calendar on their notebook but would use a touch screen device in the kitchen, says T-Mobile's John King. (And yes, he freely admits it's a gender stereotype, but it's what customers say).

Vega helps you track the family with a shared calendar app using Google Calendars but with an interface optimised for touch and adding some helpful features for family calendars. You have a colour-coded calendar for each family member – and calendars for recurring events like clubs and activities – with photos of everyone, and the default view shows all the calendars in columns side by side.

If you collapse the calendars for everyone else, you still see when they're busy without seeing the details (and appointments are colour coded by the family member who organised them). You can share calendars with family members or friends outside the family via a simple dialog box (which is easier than the equivalent settings on Google Calendar on the web).

You can view and update the calendars on a PC or phone, but putting them all in the same place on a device that can sit in a corner of the kitchen gives you the 'digital fridge door' Intel and Microsoft Research have been talking about for a while.

The Vega – which will get a name that positions it as a family 'hub' – sits on a stylish magnetic dock and induction charger, so there's only one power cable to deal with and you can easily pull it off and use it as a tablet but the magnet grips it firmly enough that it won't fall over if you drape the morning paper over it.

The 15" screen is resistive, so that you can use a pencil or wooden spoon to work it if your hands are covered with flour or mud, but the home, menu and back buttons at the bottom are capacitive so they won't trap dirt.

Web browsing with the T-Mobile tablet

Inside is an Nvidia Tegra 2, so you can also use the Wi-Fi connection to browse the web, watch YouTube videos (thanks to the beta of Flash 10.1), HD video and – when the BBC agrees, which King is "confident it will" – BBC iPlayer.

Because of the screen size, it doesn't include Android marketplace (not all apps will work at this size); the designer of the tablet, Seattle-based Innovative Converged Devices, plans to work with app developers to create specific apps that you can download.

It's a phone, so you can text it to leave messages for the rest of the family to see. There's a webcam so you can take quick snaps or have a video conference, twin speakers so you can use it as a speakerphone while you're cooking and a 3.5mm headphone jack. And there's an SD slot under the same cover as the SIM card, so you can look at photos or transfer media; there's also a USB port on the side for connecting storage or a USB keyboard (although "keyboards get full of crumbs and rubbish," warns King, so it's unlikely to come with one).

An alternative dock will have more USB ports and stereo speakers, with the connection going through the same dock connector rather than needing cables.

As it's a prototype, King isn't ready to give the battery life but he expects it will be "far in excess of what's needed for normal use"; Nvidia is talking about eight hours of video playback and more.

King doesn't have a firm launch date, although it will definitely be this year, he says: "We have a specific time in mind but I can't share it". And the price isn't set, either, although he emphasises that "T-Mobile is a mass-market, affordable brand and that's where the price will be" and says it will come with call packages that make it "affordable" to call family members from the Vega, so it can be a way to keep everyone in touch. It will certainly be cheaper than kitchen-friendly PCs like HP's TouchSmart.