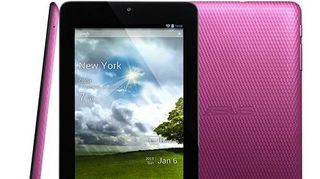 While Asus just barely snuck out an announcement for the MeMo Pad last month, the firm is prepared to make a little more noise for the 7-inch tablet's launch today.

The firm officially launched the MeMo Pad today, and Asus is marking the occasion with a video overview of the tablet's features.

The video also delves into some of the tablet's more attractive hardware features, including 5GB of cloud storage from Asus that can be used to sync data between a PC and the MeMo Pad.

The other 7-inch Asus tablet

The focus on apps over hardware might have to do with the MeMo Pad not exactly being a powerhouse of a tablet, a sort of smoke and mirrors to distract from the less than stellar specs.

That's a far cry from Asus' other 7-inch tablet, the Nexus 7, though it's still running Android 4.1 Jelly Bean and has a powerful 4270mAh battery, so the MeMo Pad can hold its own for everyday usage.

The MeMo Pad is priced at a budget-friendly US$149, and comes in gray, white, and pink. Though Asus says the tablet is launching today, it does not seem to be available for sale anywhere quite yet.