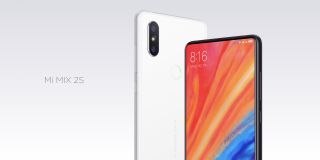 Xiaomi just launched their new flagship phone in Shanghai. The company didn’t speculate on when the phone will be launching in India, but they did reveal all of the phone’s specifications.

There’s been a lot of conjecture over whether the Mi Mix 2S would come with a iPhone X-type notch or will the device be notch-less.

The new flagship phone by Xiaomi is, in fact, notch-less but does sport a vertical dual camera setup similar to Apple’s design. Xiaomi also employed this design on the Redmi Note 5 Pro, which launched earlier this year.

Teasers have already shown wireless charging support and AI tech for the device’s cameras, which do hold true.

The launch was very Apple  like, with the company going heavy on constant comparison videos for images, design, wireless charging and even, digital assistants.

This roughly translates to Rs 41,435 for the premium model, Rs 37,291 for the mid-range model, and Rs 34,182 for the basic variant. The top end model comes with its own wireless charging port and supports all global bandwidths.

It will go on sale in China on 3rd April, but the India release date is still awaited.

In comparison the Mi Mix 2, the design hasn’t changed considerably and neither has the battery size. The Mi Mix 2S does sport a narrower frame and has an upgraded dual camera.

The phone has curved edges, a ceramic body, and an aluminium frame. It’s available in two color variants, that is, black and white. The black device will come with gold rims, where as the while variant will come with a silver rim.

It was speculated that the new flagship from Xiaomi would come equipped with Qualcomm’s fastest processor, the Snapdragon 845. And it holds true, with the Mi Mix 2S being first phone with the flagship chipset to be in launched in China. It clocks at 2.8GHz and comes paired with the Adreno 630 GPU.

In collaboration with Tencent, Xiaomi showed a performance comparison with the iPhone X where the Mi Mix 2S performed better with less battery consumption and without heating as much.

The premium variant of the phone comes with 8GB RAM and 256GB of onboard storage. There are two other variants with 6GB ROM but storage options of either 64GB or 128GB.

The phone comes with a do not disturb mode and Xiaomi’s digital assistant ‘Xiaoai’. Since Xiaoai is a Chinese digital assistant, this feature probably won’t roll out on the devices that will come to India.

Just like the Mi Mix 2, the Mi Mix 2S comes with NFC functionality making sharing easier for users. The phone also supports AR and through its strategic partnership with Google, the phone is capable of playing games enabled by AR Core.

A significant feature that was introduced on the Mi Mix 2S Qi charging. This basically means that the phone now supports wireless charging through 7.5W quick charge. Xiaomi’s also launching its own wireless charging port for 99 RMB (Rs 1,025), which is relatively cheaper than the other options in the market.

The Mi Mix 2S is first Xiaomi phone to support wireless charging, and one of few Chinese brands that offer this feature.

In February, a teaser came out showcasing iPhone X-like gesture support. Since the previous renders of the phone didn’t show any fingerprint scanner, the teaser led to further assumptions about the Mi Mix 2S having an under display fingerprint reader along with on device AI technology.

But at the actual launch, the Mi Mix 2S does come with a fingerprint scanner around the back.

Previous rumours hypothesized that the Mi Mix 2S has a front camera in the top right corner, rather than on the bottom right corner like the Mi Mix 2, but this isn’t the case.

The Mi Mix 2S also has a single shot dual camera design with two 12MP cameras on the back. The pixel size has increased from 1.25nm to 1.4nm, which is much larger than the what was available on the Mi Mix 2. The iPhone X sports a 1.25nm sensor in comparison, though Xiaomi does admit to using Apple’s camera solution.

The Sony IMX 363 sensor is a flagship level component, which is paired with the dual pixel autofocus feature. In combination, Xiaomi claims that it will enable the camera to focus faster in low light environments. The optical zoom feature, in addition, will be useful for live situations and long range shots.

To prove the Mi Mix 2S’ camera competence, Xiaomi got a DxOMark rating for the phone which is a industry wide benchmark to assess their smartphone cameras. Xiaomi’s Mi Mix 2S scored 101, exceeding the 100 mark, which is fairly impressive.

The camera has also been equipped with Artificial Intelligence (AI) so that users can use the Bokeh mode. There’s a dynamic mode where they can save their photos as a gif and the app allows users to change the shape of the background blur. For example, round blurred lights can be changed to hearts.

When users will enable the AI mode to take landscape or macro shots, Xiaomi claims that the colors come out with better contrast and saturation. AI also makes it possible to have Bokeh mode in single camera mode, rather than being dependent on dual cameras so the front camera on the Mi Mix 2S can Bokeh selfie images as well.

For business users, when taking photos of presentations or events, despite the optical zoom, some of the images come out unclear. Using AI technology, Xiaomi gives users the option to enable the resolution recognition so that images will be more crisp.

Another AI features that’s been integrated in the Mi Mix 2S with the help of its camera is instant translation. If the user scans a menu or a simple documents, AI can give an instant translation of the text and convert the currencies as well.

The Shanghai Xiaomi launch also included two other products. First, was the Mi Gaming Laptop with 16GB RAM, 256GB SSD and 1TB HD. Keeping gamers in mind, the company kept the cooling feature of the laptop at the forefront of their development. The casing includes a ‘3+2’ cooling pipe design and 2 cooling fans that come with their own turbo mode.

The second product they unveiled was a miniature version of the Mi AI speaker, called MINI, which supports over 200 functions. The company stated that it’s the cheapest AI enabled bluetooth speaker in the market at 169RMB (Rs 1,746). According to the feedback that they got, the product is very popular among children and senior citizens.