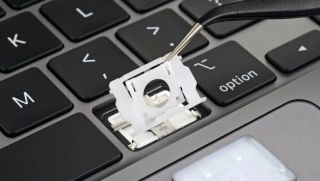 iFixit, a website well known for taking apart electronics and seeing how easy (or not) they are to repair, has taken a screwdriver to the new MacBook Pro 16-inch model – and found both good and bad things about Apple’s latest laptop.

First, the good news. iFixit opened up the MacBook Pro 16-inch and found an impressively upgraded laptop that represents a big leap over the previous model, released earlier this year.

The most noticeable update (apart from the larger 16-inch screen, an IPS Retina display with 3,072 × 1,920 resolution) is the new keyboard. Based on the iMac’s popular Magic Keyboard, the new one found in the 16-inch MacBook ditches the Butterfly switches, which had been prone to breaking, with the Scissor switches of the Magic Keyboard.

This is a move designed to prevent the new MacBook Pro’s keyboard from suffering from the same issues older MacBook Pros had, where certain keys become unresponsive due to dust and crumbs. As iFixit discovered, there is no dust-proof membrane for the new switches.

This was something that Apple added in a bid to stop the Butterfly switches from failing, and its absence in the new MacBook Pro 16-inch’s keyboard can be seen as a sign of confidence from Apple that the new keyboard won’t have those problems.

The iFixit team found that the scissor mechanism of the new keyboard is almost identical to the old ones found in the iMac Magic keyboard, but 0.22mm thinner. As iFixit point out, this is probably due to a lot of hard work by Apple’s engineering team to ensure that the keyboard remains as slim as possible.

iFixit also managed to swap some of the keycaps from the white Magic keyboard with the new MacBook Pro – showing how similar the keyboards are.

The team also uncovered the new and improved speakers that are set up to cancel out each other’s vibrations for a cleaner sound. The three-mic array is also laid out in the same way as previous mic arrays, but iFixit observes they look “a little beefier,” which the website suggests could be because they are higher quality mics (something Apple has been boasting about when talking about the new 16-inch MacBook Pro).

As iFixit explains, Apple seems to have managed to increase the battery size by making each battery cell 0.8mm thicker – a trick it learned from the iPhone 11.

While the MacBook Pro 16-inch gets props for a lot of its upgrades, iFixit isn't impressed with how repairable it is, giving it a score of just one out of 10.

This is because Apple has kept to its frustrating habit of soldering the processor, RAM and storage to the logic board, while securing the keyboard, battery, speakers and Touch Bar with glue and rivets.

This makes it incredibly difficult to remove the components and switch them out if they break. This can be see as an anti-consumer move as it means if a single component breaks, the customer will need almost the entire laptop to be replaced.

With Microsoft going some way to improving the repairability of some of its Surface devices (with the Surface Pro X and Surface Laptop 3 having removable storage), it’s a real shame that Apple seems to be resisting doing the same with the MacBook Pro.

As iFixit says in its conclusion, “Despite the thumping new speakers, the podcast-quality mic array, and that giant screen, we can't help but feel that Apple can do better – especially after seeing Microsoft perform some real engineering magic to make its latest laptops more repairable. Here's hoping that the 2020 Pro lineup will really take our breath away.”