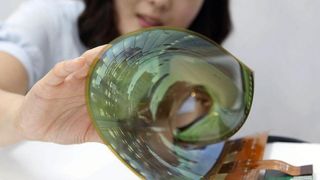 LG has long experimented with flexible displays, with years of research starting to bear fruit in the company's super-light, super-bendy (and super-expensive) OLED TV displays. It now looks as though the company may be ready to begin trickling that tech down into some interesting portable devices.

A 2016 patent, uncovered by LetsGoDigital describes a device with a flexible, extendable display. Filed with the World Intellectual Property Organisation and published last week, it shows a device that can be pulled at the sides, extending the screen depending on the application. This appears to leave an exposed edge to the extended part of the screen, with a metal frame circling the display when back in its 'neutral' position.

The patent shows a number of different applications for the device, including an extended keyboard, and more screen real estate for when dealing with emails, versus the at-a-glance portability of its smaller portrait position.

The device, as described in the patent, would include many of the features you'd expect to find in your average smartphone too, from a wireless module to a camera and mic, right down to a removable battery.

However, as ever, a patent is now sure-fire sign of a product in the works, but merely a company protecting its ideas from the competition.

But, as the smartphone market has matured, and flexible screen technologies improved, the potential for a real device like this has grown. It's increasingly difficult for phone buyers to get excited by yet another metal-and-glass slate phone. An idea like this brought to fruition could reap rewards for LG, whose smartphone business – while turning out solid devices – has never quite reached the heights it hoped for.