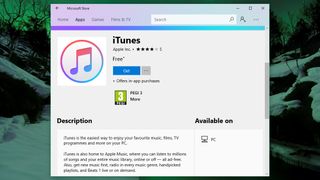 iTunes has finally landed in the Microsoft Store. The launch comes three months after eagle-eyed Apple fans noticed small tweaks to the desktop software suggesting a Windows app was in the works, and almost a year after it was announced at Microsoft's Build 2017 conference.

This makes iTunes available to users of Windows 10 S (or S Mode, as it will soon become), who are unable to install software from outside the Windows Store.

We’d expected the app to arrive alongside the Windows 10 Spring Creators Update (or Redstone 4, or April Creators Update), but with that launch still in purgatory, it seems Microsoft has relented and let Apple go ahead.

iTunes for Windows is a straight port of the existing desktop software, but packaged in a way that enabled distribution via the Microsoft Store. The old desktop software won’t update to the new app automatically though; when you install the app, the installer will offer to remove the legacy version for you. Your music library won’t be affected.