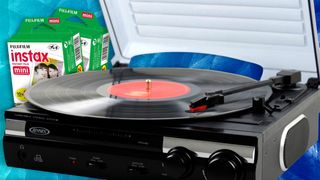 'Tis the season to be retro, as a turntable and instant film became among Amazon's best-selling products this holiday.

The semi-recent resurgence of vinyl records may have played a role in the Jensen turntable's success, with the record player standing out among Amazon's other top-selling (though far less analog) sound systems, which included the Yamaha V677 Receiver and the SONOS Play:1 smart speaker set.

High sales of instant film were equally anachronistic, sharing the spotlight with high-tech offerings like the GoPro HERO4 Silver as Amazon's best-selling item in its camera department.

This holiday was also a watershed year for Amazon's own products, with massive growth reported for both Amazon's premium membership service, Amazon Prime, and sales for Amazon's line of tablets, particularly the Fire, Fire Kids Edition, and Fire HD 6.

"This was another great holiday season to be a Prime member," said Amazon CEO Jeff Bezos in the official press release. "We welcomed three million new members [to Amazon Prime] in the third week of December alone."

The expedited shipping that comes with an Amazon Prime subscription must have come in handy for several customers making last-minute holiday purchases, with the service reaching a record number of packages shipped worldwide this holiday, reaching to 185 different countries.