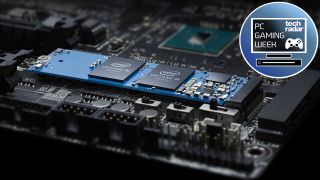 Of course, one area where Intel hopes to see traction for these M.2 slot-bound modules is PC gaming, a hobby that’s expensive enough as it is, with many gamers having to choose between fast (SSD) and capacious (HDD) storage solutions, but not able to get both without spending a small fortune.

While these modules require the latest Intel chipset to function, the idea is to bring the speed of SSDs to higher-capacity HDDs without resorting to today’s common SSD boot drive solution. An option that, mind you, many PC gamers can’t realistically afford and some can’t be bothered to configure.

It just depends entirely too much on the game at hand, not to mention your financial situation and level of technical knowhow.

Optane loads PC games faster, but which ones?

To figure out whether Optane memory modules actually work, we’ve run loading tests on an Intel Optane-equipped machine provided by Intel on two top PC games. The PC is running an Intel Core i5-7500 processor with a 1TB Western Digital Black HDD at 7,200 rpm and a 32GB Intel Optane Memory module.

Using a stopwatch, we’ve timed how long it takes for these games to load from execution to menu screen and how long each takes to load a level, or its first piece of content upon continuing a saved or new game.

All below times are measured in seconds:

The first game we tested was suggested by Intel as representative of Intel Optane at work: Fallout 4. For those who haven’t played, it’s a massive game that depicts a vast world filled with tons of graphical and physics-driven elements.

Unsurprisingly, Fallout 4 showed demonstrable change between load times with and without Intel Optane enabled. In loading the app, wait times were reduced by 15%, while time loading a saved game state was brought down by a whopping 46%.

Meanwhile, a popular PC game of our choosing, Portal 2, displayed far less significant of a change in load times between having Optane disabled and enabled. Full app load times decreased so narrowly that it would only be fair to chalk up as an anomaly. The reduction in level load times was a little more pronounced, at 6.5%.

So, will sprucing up your dated gaming rig with an Intel Optane Memory module and a bigger hard drive, in lieu of a usually-pricier SSD boot drive combined with a large hard drive, get you into your games faster than without? (Don’t forget the new Intel CPU and motherboard.)

Yes, but that apparently depends a whole lot on the games in question, or at least the type of games. A game with lots of simulation and AI involved, like Fallout 4, clearly stands to benefit plenty. But, smaller games, like Portal 2, perhaps simply aren’t big enough content-wise to see a marked benefit.

At any rate, while the load time cuts you’re going to see in your hard drive on Intel Optane will not be uniform, your entire system will grow faster as a result and generally for less cash (and in a less complicated way) than going solid-state.

Welcome to TechRadar's 3rd annual PC Gaming Week, celebrating the almighty gaming PC with in-depth interviews, previews, reviews and features all about one of the TechRadar team’s favorite pastimes. Missed a day? Check out our constantly updated hub article for all of the coverage in one place.