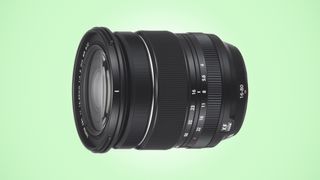 Fujifilm has been steadily adding to its XF and GF lens portfolios in recent months, and leaked images suggest that each optics stable will shortly welcome a new member.

Both lenses have already been included in Fujifilm's lens road maps for the two lines, although little other information has been released up until now.

The XF16-80mm f/4 R OIS WR is a zoom lens designed for X-series bodies such as the X-T30 and X-T3. Its name makes a number of things clear, such as a constant f/4 aperture, weather resistance and the presence of optical image stabilization, while the R in the name denotes an aperture ring – something that can be seen in the leaked images below.

The images also show a filter thread of 72mm and Super EBC coating, with the latter promising 99.8% optical transmittance and just 0.2% reflection across the visible spectrum. This same coating has already been used across a number of X-series lenses, such as the XF18-55mm f/2.8-4 R LM OIS and XF18mm f/2 R.

Nokishita goes on to claim that the lens has been constructed from 16 elements across 12 groups, and that it has a minimum focusing distance of 35cm and a magnification of 0.25x. Other specs include a weight of 440g and dimensions of 78.3 x 88.9mm.

The second lens is the GF50mm f/3.5 R LM WR, which has been crafted for users of the company's GFX medium format cameras. Right now, that comprises three models: the GFX 50S, GFX 50R and GFX100.

Offering a focal length of around 40mm in 35mm terms, the lens offers weather resistance and an aperture ring, together with a linear focusing motor on the inside. The only other specs that are obvious right now is a filter thread of 62mm.