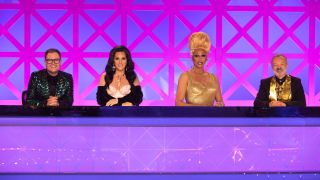 Cover girls that is a wrap! This glamorous hit TV series has unfortunately come to an end - don't be too heartbroken, RuPaul has confirmed that there will be a second season next year.

And if you aren't completely caught up? Don't worry you can still see the best woman win and the rest sashay away on the eleganza extravaganza of the finale, or you can watch more episodes if needed.

The final episode aired Thursday, November 21 at 8pm BST on BBC Three and is now available on BBC iPlayer, along with all episodes from this season.

We've been served fish, glam-rock, body, bond girl glamorama, queen of your hometown and so much more!  And now we're all ready for some emotional and dramatic finale realness.

So you better sissy that walk and shantay you stay to watch the iconic final episode  of season one of RuPaul's Drag Race UK. To make it even better the choreographers in the finale will be AJ and Curtis Pritchard!

The final three queens - Divina De Campo, Baga Chipz, The Vivienne - will also be joined by the fellow eliminated queens who will be coming back to witness the ultimate episode.

How to watch RuPaul's Drag Race UK Finale online for free in the UK:

For those trying to watch RuPaul's Drag Race UK, BBC Three is the place to be. The finale aired on Thursday, November 21 at 8pm UK time and is now available on BBC iPlayer. BBC Three no longer features on your freeview channels or Sky tuners, so you'll have to go online or login through iPlayer (where they'll stay well after the event) to watch.

As well as the UK above, we'll tell you about your viewing options in the US, Canada and Australia further down this page.

Planned a holiday at the wrong time? Had to go on a business trip? Don't panic, you can still watch RuPaul's Drag Race UK online. This is by using a VPN to bypass the whole geo-location situation.

Which VPN is the ideal one for you? Our top pick is ExpressVPN. And how do you use that to watch RuPaul's Drag Race UK? We're glad you asked...

Once you have it, go ahead and open the VPN app, hit 'choose location' to virtually transport yourself home - it's super easy to do. Once you've changed to an appropriate region, you just need to go to your home broadcaster and then you're ready to watch all the challenges and drama unfold on RuPaul's Drag Race UK.

How to watch RuPaul's Drag Race UK Finale online in the US:

To watch it on Logo you simply need a TV subscription that includes the channel, plus luckily for you logo has an app so you can download it to watch on your tablet or smartphone. RuPaul's Drag Race UK Finale will air in the US on Friday, November 22 at 8pm PT.

Where to watch RuPaul's Drag Race UK Finale from anywhere else

Neither in the UK nor the US? Don't worry hennies we have tracked down other countries where you'll be able to watch RuPaul's Drag Race UK Finale online.

In Canada, subscription services Crave and OUTtv have picked up the rights. While it's WOW Presents Plus and Stan in Australia.

Crave and OUTtv will air the episodes the same day as they air in the UK- which means the premiere of this fabulous series is already available and waiting for you to watch it. The same goes for Stan and WOW Presents Plus - they have already added the premiere of RuPaul's Drag Race UK. You will need a subscription to the service that you wish to watch it on (Crave, OUTtv, WOW Presents Plus or Stan).

If you're elsewhere, maybe holidaying abroad or living in a country not on this list? Don't worry, you can always get a VPN and stream the show from one of the countries above.

Who are the RuPaul's Drag Race UK Contestants?

Without further ado we introduce to you the final Queens:

Who has been eliminated?