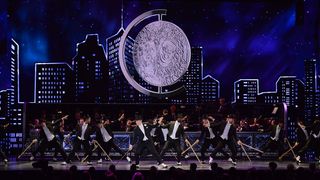 The 2018 Tony Awards will be held in the iconic Radio City Music Hall in New York City.

The ceremony takes place on Sunday June 10 and kicks off at 8pm ET (5pm PT and 1am Monday morning BST).

It’s time for the 72nd edition of the annual Tony Awards, celebrating the very best in theatre from the past 12 months. With a host of celebrity appearances to look forward to – not to mention finding out the winners of this year’s prestigious awards – we’re here to help you live stream the revelry.

The 2018 Tonys will be presented by Sara Bareilles and Josh Groban, but the show could well be stolen by a certain Bruce Springsteen. ‘The Boss’ will be performing live at the extravaganza, giving us a taste of his critically-acclaimed show, Springsteen on Broadway. He’ll also be presented with an already-announced Special Tony Award, as will John Leguizamo for his one-man comedy show, Latin History for Morons.

The rest of the awards remain a mystery, so you’ll have to go down one of the routes below to tune in and find out where the accolades are heading. Live stream the Tony Awards with our guide.

Stream Tony Awards live with a VPN
Below we have details of where you can watch the Tony Awards 2018 - even if there's no official broadcast where you live, there's still a way to watch. Use a VPN to dial in to a country that does have a stream to pick up their live video feed. . A VPN is perfect for this as it allows you to change your IP address so you appear to be in a completely different location. We've tested hundreds of VPNs and can recommend these as the best three VPNs currently available:

How to watch the 2018 Tony Awards: live stream in the USA

TV coverage in the US will come courtesy of your local CBS station. Online, the CBS All-Access service will be live streaming the event. Subscribers can watch via their web browser, or by using CBS apps for Apple TV, Android, Chromecast, Fire TV, iOS, PS4, Roku and Xbox.

CBS All-Access costs $5.99 a month, but has a free week-long trial. So if you're a theatre fanatic, now's the time to take advantage.

How to live stream 2018 Tony Awards in Canada

Hoping to catch the Broadway bonanza from Canada? You’re in luck, thanks to CTV’s live coverage, kicking off at 8pm ET. As an added bonus, the channel will be streaming the broadcast live for free on its website: ctv.ca.

Your Tony Award live stream options in the UK

Elaine Page will be hosting a Tony Awards special on BBC Radio 2, but live TV coverage won’t be available in the UK.

The best option is therefore downloading a VPN service as per the tips above, then signing up with CBS All-Access via a US IP address, or trying ctv.ca and setting your location as Canada.