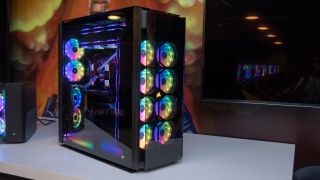 The Corsair Obsidian 1000D is, hands down, one of the biggest and baddest PC cases to come out in recent years. With room for two complete systems, up to five graphics cards, two 480mm radiators in front and another 420mm up top, there’s no other chassis on the market that can hold more components.

Aside from being a monster case in size and capacity, Corsair employed a bunch of new features with its latest Obsidian case, including liquid-cooling drawers and French doors to hide all the PC power cables – and even six SSD trays.

The only thing more impressive than everything the Corsair Obsidian 1000D can hold is its extensive, two-year product development cycle. Luckily, we got to hear all about the super tower straight from Aaron Neal, Corsair‘s Manager of Worldwide Product Marketing for DIY Components.

As you might have guessed, the 1000D was a massively complex PC case, and Neal tells us that “there were a lot of things that, once we had an idea, once we prototyped it, it was like ‘Oh wait, that doesn't work.’ Let’s go back, try and do something a little bit different.”

At its core, Neal says the Obsidian 1000D was always about custom cooling. Whether that meant dual or triple custom loop systems or ultra-thick radiators, Neal wants to give users the opportunity to do everything they dreamed of.

That said, Neal also made sure the Corsair team didn’t let themselves get too crazy and make the Obsidian 1000D too large.

“We have a very specific height that we try and stay under because there's an average height of the desk,” Neal explains. “If it's as tall as I am, there's going to be a problem.”

“It's a very heavy case, empty,” he says. “You fill it with radiators, you fill it with water – all of a sudden, it's a two-man lift no matter what and you need to have a little forklift to carry it around.”

Thankfully, Corsair also made attaching all those aforementioned radiators with telescoping radiator trays that come out of the case. However, to support all that weight, Neal’s team couldn’t just go with a basic sheet of metal – they had to develop a new slide out mechanism similar to that of a desk drawer.

“That took quite a bit of work,” Neal says. “At first, it's ‘Okay just put some sliders on there and we're good,’ but you have to take into account the weight of the radiators, the weight of all the fans – and moving it after it's filled and you have all the connections done is very hard.”

Still, Neal is confident that Corsair’s telescoping radiator trays can take the weight.

“We built it out, and we did some physical testing, but it wasn't just with dumb weights. There's force meter tools that specifically will give us the draw weight of what it takes to snap it off.”

The Corsair Obsidian 1000D most striking design characteristic – again apart from its sheer size – is that it features tempered glass on almost every side. Although tempered glass hasn’t had the best track record for airflow, Neal tells us that Corsair engineered the problem out by thoroughly testing airflow with a wind tunnel machine.

“A lot of the airflow concerns that people see is because they don't see a clear path [for the fans],” Neal says. “A clear path is great, and obviously, in the best-case scenario, that's what you would go for.”

However, Neal argues you simply need to leave a gap between the intake fans and the 1000D’s front tempered glass panel.

“We actually have a very big test machine in the back, and we can sit there and do millimeter increments, and get to the point where it's like, ‘Well, it's no longer...there's very little extra airflow going, once we put it out.’”

Corsair’s wind tunnel machine is the very same one we saw during our tour at the company’s headquarters, and it’s pretty much a cylindrical tube with a wind meter in the back.

“It's automated test process, so I can actually go stick a fan on there, and say, ‘I want it tested at this, this, this, this and this,’ walk away,” Neal tells us. “In a half hour, I'd come back, and I'd have six different PQ curves of how that fan would react at different RPMs, different voltages, different PWM input levels, anything I want.”

“And then, on the reverse of that,” Neal continues, “I can go take a power supply housing, a radiator, a cutout from the back of the case, put it on there, do the same thing, and get a resistance curve at the same time. So, we have all this data now, where I can look at it and go from a flow standpoint. I know how this stamp out pattern is, versus this stamp out pattern in the back of my case restricts airflow.”

At that point, you can really tune where the fans are, what the data from the fans are, so that you have something that really works very well together,” Neal saya. “And, that's been huge for us from an engineering perspective, because we were able to go through with multiple different fan designs and say, ‘This actually did X percent better than this design.’ And so, that's been a wonderful tool for us to have over the years.”

Of course, just because the Corsair Obsidian 1000D was a smashing triumph doesn’t mean Neal and his team are done with innovating on PC cases.

“I would say, especially with the Obsidian 1000D a lot of started with great ideas, like with the trays and the French doors,” he says. “Being able to switch out different things easily, so maybe more spare parts, faster connections, like USB Type-C, will definitely be something we're looking into in the future.”

“Right now, it's on our high-end stuff, but as the price of that goes down, I'm sure you'll see more of that.”