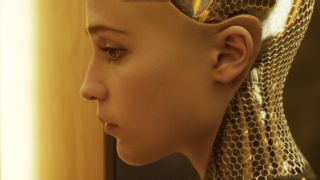 Update: Ex Machina won the Oscar for Best Visual Effects Sunday night, beating out some heavy favorites to take home the award. Read our interview with the film's VFX supervisor Andrew Whitehurst below.

With Oscars weekend upon us, we have the nominated flicks on our minds, and one standout film in particular. No, it isn't The Revenant.

Ex Machina, an independent film with a small cast, is up for the Academy Award for Best Visual Effects. It's going against big blockbusters Star Wars: The Force Awakens, The Martian, Mad Max: Fury Road and The Revenant, though it stands as good a chance as any of winning.

To discuss its stunning visual effects, whether we should be scared of artificial intelligence (AI) and the role virtual reality already plays in storytelling, I chatted with Ex Machina's visual effects (VFX) supervisor, Andrew Whitehurst, who may go home with a golden statue on Sunday night along with his fellow nominees Mark Ardington, Sara Bennett and Paul Norris.

Whitehurst, who's worked on big-scale films like Troy, Charlie and the Chocolate Factory, and Harry Potter and the Order of the Phoenix, believes that, even as VFX has matured over the last decade to be a fundamental part of production rather than an afterthought, the industry is being pulled in two directions.

"The blockbusters continue to get bigger and brasher, and people love them for it. So, massive films, with huge crews and stellar budgets, will continue for the foreseeable future. I think that's widely appreciated, though," he says. "What perhaps many cinema goers don't notice is that more lower budget, less spectacle-heavy films are making much greater use of VFX."

Films like Ex Machina. By most accounts, the film stands apart when compared to the other VFX nominees. It's smaller in scale than Star Wars: The Force Awakens and The Revenant, and quieter than Mad Max: Fury Road, or even The Martian. It's visual effects, though stunning, aren't delivered as heart-pounding spectacles.

"I found it interesting when seeing the showreels cut together to promote the [Academy] awards that they don't really know what to do with Ex Machina, because it has no wham-bam moments that work well in a quick cut reel," Whitehurst says.

"Ex Machina's power comes from the long shots and the tension built up by the pace of the editing. It's unusual for VFX to be used in that context, and it was very challenging, as there's nowhere to hide, but when viewed as a whole it packs a real punch."

A different type of challenge

Ex Machina consists of little more than four characters, featuring long, still moments of conversations, typically between no more than two characters at a time.

Whitehurst reveals that the biggest challenge for his team at VFX firm Double Negative was turning an actress into an android and copying Vikander's subtle movements to create her character's robotic elements.

"Alicia, who trained as a dancer, is extraordinarily graceful and elegant in her movement, and sometimes Ava doesn't seem to be moving at all, just standing, talking with Caleb," he explains.

"You might imagine that this would be easy to copy, but it turns out that no one is ever truly standing still: there are always tiny, subtle movements, and it's these that are especially hard to copy because they are so delicate."

The shots were also longer than usual, Whitehurst says, at least by modern movie standards – at around eight seconds, adding to the complexity.

"Most of the work in the film you know has to be an effect, but I think the extent of the work sometimes passes people by," Whitehurst says.

He points to the scene wherein Ava dresses herself. It required the VFX team to not only create the parts that made up Ava's body, but also add CG clothing that could be seen through sections of the robotic limbs.

"We had to create the inside of her stockings and dress," he says, "and animate them to perfectly match the photographed real clothing."