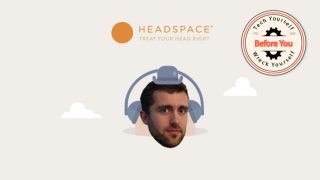 Mindfulness is big business at the moment, and I thought it was about time I tried the meditation movement of the moment for myself. And where better to start than with the household name in mindfulness; Headspace.

The app itself is beautifully designed, with a cartoonish style, avatars to guide you through the different sections, and animations that are just on the right side of childish.

I’m sure this is a pretty common experience, but there’s something about someone trying to do ‘calm’ that makes me want to be the opposite. And this was definitely how I was when I first sat down with Headspace.

There’s something about Andy Puddicombe’s soothing, geographically nonchalant voice that made we want to scream: ‘pronounce ‘t’ properly!’ at my headphones. The performer in me was there thinking ‘he must have been sitting really close to the mic for this’ and the tech-pedant was frustrated that the audio was a little fuzzy.

And I wasn’t only mentally tense. My right shoulder seemed to descend by about 12 feet, my ribs noticeably loosened, and I noticed that I was clenching my buttocks as if I was trying to crack a nut.

It’s pretty staggering how much you don’t notice about your body unless you actually focus on it. I’d just kind of assumed because of my physical theatre background that I was very ‘in’ my body, but apparently not.

Headspace does a very clever thing that it’s free to download, and there’s a full week that you can do before you actually have to pay for anything. Anyone who knows about habit forming will know that you only need to do something five times for it to become a habit, which means that Headspace is forming a habit, then asking you for money.

From an app that has clearly put a lot of work into psychology, the cynic in me thinks there’s an element of manipulation at hand here, but frankly I can’t blame Headspace for the manipulation.

Mental health is still a massively under-discussed element of health and it’s a little sad that I’ll think nothing of spending money every month on my gym membership or on Netflix, but when asked to pay a monthly subscription for my mental health I baulk.

It’s a weird one, because since starting Headspace, I’ve noticed an improvement in my mood; I’m less anxious, less angry, less prone to negative thoughts. It’s just not a concrete thing I can pin down, so it’s easy to dismiss it as correlation rather than causation.

It’s interesting that Puddicombe is himself an ordained Buddhist Monk, but there isn’t a religious aspect to the app. My wording above mirroring the title of Alain De Botton’s book Religion for Atheists, was no accident. It feels like in creating Headspace, Puddicombe has implemented an element of that book; taking the positives of the practice of religion without the religious aspect.

Perhaps I’m over thinking it. It turns out I have a habit of doing that. Whatever the case, I’ll definitely be continuing with mindfulness.