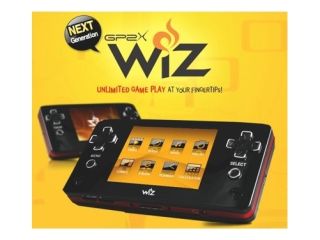 The GP2X Wiz, successor to the Korean GP32 and GP2X consoles, is due for release in October, and is currently being promoted by developer Game Park Holdings as having a far more commercial approach than its predecessor.

TechRadar spoke to Canadian software developer Jeff Mitchell, developer of launch title BattleJewels, to learn more about the development scene, and GPH's part in it.

A recent press release stated that Game Park Holdings will be releasing new software for the Wiz every month. Can you elaborate on this promise, and explain how it might work?

I've a limited view into that world, but I can offer up that the titles seem to include a mix of pure commercial (such as GP2X titles and it looks like titles from the original GP32 modernized as well) and commercialized versions of GP2X homebrew - ie: as a small company, getting new content attracted to a platform is very difficult so they're trying to at least leverage what they do have access to - prior assets and the very strong homebrew community that has built up on their devices.

Let's be frank - the GPH machines pretty much make it on homebrew, so they know the value we developers add into the ecosystem, and this time they're trying to work more with all of us.

More to point, GPH have made the effort to appoint one or more people as liaison to developers of popular homebrew titles in hopes of getting their influential cooperation, and going so far as to offer assistance in commercializing applications.

GPH is offering some expertise in game assets (such as artwork), localization (to Korea, for instance) and offering suggestions (application ideas, interface design and so forth) to help differentiate for-sale games against their previous homebrew incarnations.

Anyway, I know there are some boxed titles in the works, and I suspect an online store (Certainly GPH has often published through various other online sources such as GBAX, Play Asia, etc.)

Can you explain how developers are approached by GPH to contribute to their in-house software library?

I think some applications have been 'bought up', but expect most are in cooperation with the developers instead. Certainly for my game, they've been wanting to cooperate on changes (they're a small organization, no way they could manage code on dozens of games at once).

Locating the popular homebrew is not difficult... a night of trolling some of the fan sites will yield all that is needed, and there are a few recurrent homebrew competitions whose posted results pages will provide handy bookmarks. BattleJewels ranked pretty high in last year's GBAX competition, as did some of the other titles I believe are being farmed for the Wiz.

Naturally I can only speak for myself though. GPH emailed me some time ago around the beginning of the year - informing me of a few in-progress details of an upcoming device, asking for source for the BattleJewels game (code, artwork, etc) so they could do some rework to ensure it would operate on the new device and possibly do some upgrades along the way.

BJ is not an open source work so the request was curious, but I figured they meant to just bring top homebrew onboard but in the more or less same state it was in on the GP2X. I wrote back with some options - that we could make a build for the new device, that we didn't mind being included in the device ROM as long as game assets were untouched (credits and so on).

I suspect over time they realized that some of the people they were approaching were professional software developers and started working towards more commercial games in the traditional sense - delivered on SD, rather than UMD on a PSP for instance.