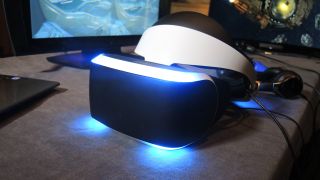 We expect the blue light will stick around, at the very least

We've had a couple of plays with Project Morpheus now and - spoiler alert - we really, really like it, but Sony has told us that the final design will likely be quite different to what we're seeing now.

Jed Ashforth, senior designer at Sony Computer Entertainment Europe, said that it's the virtual reality helmet is still in the early stages, despite how advanced it felt when we played with it.

"We're making new discoveries and advances every day," he said. "The final hardware will be not a lot llke this. There will be a lot of things that will change. Physically it will probably look different."

'What if you were unable to wake from that dream, Neo?'

Ashforth said that the design we're seeing now was locked down for the sake of getting it into developers' hands.

"We had to get to a point where we said 'Right, this is good for developers to start work on', and any further advances that come along, we'll just send out further units."

Sony World Wide Studio Immersive Technology Group director Simon Benson told TechRadar that even the current 1080p display could change before it hits market, but added that the feedback on the vision quality has been very positive so far.