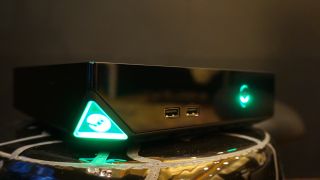 Alienware's assault on the living room through Valve's Steam Machines will begin in September, and now the company has admitted plans to launch new models every year thereafter.

Dell-owned Alienware said because there'll be no hardware customisation or upgrade options on the Steam OS-powered devices, only new models can satisfy future generations of 'resource intensive' games.

"There will be no customisation options, you can't really update it and the platform will continue to evolve as the games become more resource intensive."

Azor said different CPU and GPU configurations may be offered at the point of sale, but if gamers are more concerned with upgrading their wares as the technology evolves, they'd be better off with a gaming PC.

"There will be some configuration options when you purchase it, maybe you can get a faster CPU, maybe some more memory something like that," he added.

"If you actually want to customise your Alienware Steam Machine, maybe change your graphics card out or put in a new CPU, you would be better off with the standard Alienware X51. This particular product is restricted in its upgrade options."

The first Alienware Steam Machine will go on sale in time for Christmas with a price point not too dissimilar to the Xbox One and PS4. Incidentally, you won't be able to upgrade those either.