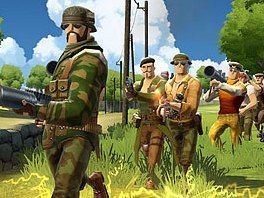 Battlefield Heroes from EA and DICE - a game that is both FREE and SUPERB... Which we have had some time getting our heads around...

EA and DICE's forthcoming free-to-play shooter Battlefield Heroes' beta phase enters its final phase this month, before the final game is ready to roll in the summer.

Battlefield Heroes is a free cartoon-style shooter for the PC where you create, customise and level up your own war hero. The game's currently in a beta testing phase before it rolls out to the general public later this year.

If you like PC gaming, then don't let the fact that this game is free and that it only takes around 5 minutes to log-on and get involved before you can get playing put you off.

Instead, let that convince you to head straight over to the site to get involved!

Indeed, one day in the not-too-far-distant future we will most likely look back at this day and henceforth refer to it as the great Battlefield Heroes Beta Giveaway day of justice.

All you've got to do is head to computerandvideogames.com to be rewarded with a free Battlefield Beta Key.

Oh. One last thing. Did we also mention that it was free?