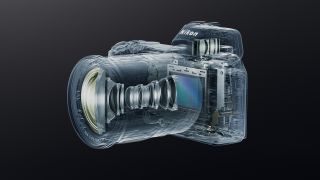 Full-frame is a real buzzword in photography at the moment. Not only have we had established DSLRs from Canon and Nikon like the EOS 5D Mark IV and Nikon D850, but Sony's also been tempting photographers with the likes of the Sony Alpha A7R III.

What's all the fuss about then and if you haven't got a full-frame camera, should you get one?

Switch to a full-frame camera and your pictures will automatically be better – or so the hype goes. But this is only partly true; a full-frame sensor camera just takes different – not necessarily better – shots compared to DSLR and mirrorless cameras with the more standard APS-C-sized sensor.

So, what exactly do we mean by 'full-frame'? A full-frame camera uses a sensor that's the same size as a single frame of traditional 35mm film, measuring 36 x 24mm. The more popular APS-C sensor size found in most DSLRs and mirrorless cameras measures 22 x 15mm. This means a full-frame sensor has more than 2.5 times the surface area of an APS-C sensor.

Sure, size has certain advantages, but there are also distinct drawbacks to making the switch up to a full-frame DSLR or mirrorless camera.

In most cases, if you want to upgrade to a full-frame DSLR or mirrorless camera, prepare to pay a premium. For starters, the added production cost of the bigger sensors (and the lower volume of production) is one area that forces cost up.

That's not the only reason though. Because full-frame cameras are primarily aimed at professionals and keen enthusiasts, there's a certain expectation as to the level of performance, features and build that these cameras should have, which again all comes at a price.

Not everyone wants (or can afford) all of these advanced features, which is why we've seen some relatively affordable full-frame cameras in recent years, with the likes Canon EOS 6D Mark II and Nikon D750 springing to mind. These DSLRs both offer full-frame sensors, but don't have quite the same ultra-rugged build and top-line performance as their stablemates. Don't get us wrong though – these are still very capable cameras that can achieve some brilliant results, while Sony's Alpha A7 III is even better, delivering top quality images with a performance to rival cameras costing quite a bit more.

Perhaps the biggest advantage of going full-frame is image quality.

While APS-C and full-frame cameras can now share an almost identical resolution – Nikon's APS-C 20.9MP D500 and full-frame 20.8MP D5 is just one example, full-frame sensors are crucially more than two-and-a-half times bigger, which allows for much larger individual pixels (or if we're getting technical, photosites) compared to an APS-C sensor that shares the same resolution.

The larger physical dimensions of a full-frame sensor mean it's also possible to increase the number of pixels on the chip without seeing this high ISO performance suffer. Both the 45.4MP Nikon D850 and 42.2MP Sony Alpha A7R III are brilliant examples of this, managing to deliver excellent high ISO results while featuring densely populated sensors.

In a lot of instances however, if you were to shoot at low sensitivities with both full-frame and APS-C camera that shared the same resolution, the amount of detail recorded would be very hard to tell apart. However, full-frame cameras have another trick up their sleeve: dynamic range.

Full-frame cameras, thanks to the larger pixels, have a broader dynamic range in general (though other factors do play a part), making them better equipped to capture the full brightness range of a scene that features both extreme areas of dark shadows and bright highlights, as well as midtones.

The size of the sensor also changes the amount of the scene captured by the camera. Although APS-C and full-frame cameras can share many of the same lenses, the visual effect they provide is different. It's the angle of view that actually changes, as smaller APS-C sensors cover less of the image projected by the lens.

This is known as the crop factor, which compares the angle of view with that of a traditional full-frame 35mm film SLR. With full-frame DSLRs and mirrorless cameras, because the sensor is the same size as a 35mm negative, that's not an issue; a 24mm lens gives the same angle of view as a 24mm lens before the age of digital cameras.

An APS-C sensor, however, sees a smaller angle of view, with a crop factor of 1.5x (Canon APS-C sensors are ever-so slightly smaller still, with a crop factor of 1.6x). This means the same 24mm lens on an APS-C DSLR or mirrorless camera actually captures the angle of view of a traditional 36mm focal length (24 x 1.5 = 36). So if you want to capture sweeping wide-angle vistas, a full-frame camera allows you to take in more of the scene in front of you than an APS-C model with the same lens.

The flip-side is that the crop factor effect of APS-C cameras becomes an advantage when shooting distant subjects. For instance, a 300mm lens is 300mm on a full-frame camera, but on an APS-C model it becomes a much more desirable 450mm – great for getting close to the action in sports or wildlife photography.

Full-frame cameras used to offer a real advantage when shooting landscapes or indoors in tight spaces. However, lens makers have combated this by developing both prime and zoom lenses with shorter focal lengths exclusively designed for use on APS-C-sensor cameras.

The typical standard zoom bundled with a lot of APS-C camera offers 18mm as its widest setting, roughly equivalent to the view given by a full-frame 28mm lens. Super-wide lenses offer settings of 10mm, equivalent to, or with an effective focal length (EFL) of, 15mm. These lenses can't be used with full-frame cameras (as they would produce dark corners), so in some ways APS-C users actually get a wider choice of optics.

It's worth considering this compatibility though if you're thinking of investing in a full-frame body down the line, as you might have to trade in some or all of your selection of lenses if you've bought dedicated APS-C glass.

Portrait photographers love full-frame cameras, as the larger the sensor a digital camera uses, the shallower depth of field (DoF) you get. This means you can throw backgrounds and foregrounds more out of focus, for artistic effect and to draw strong attention to the subject.

The reason for this is that the amount of depth of field depends on three different factors: the aperture, the subject distance, and the focal length.

In practice, this means wide apertures on full-frame cameras provide noticeably more defocused backgrounds than on APS-C cameras. It's not by much – about a stop – but it does make a difference. If you're shooting a portrait for instance, using the same angle of view, a full-frame camera at f/4 produces a seemingly similar amount of depth of field and background blur to an APS-C camera at f/2.8.

APS-C cameras are better, however, if you want to maximize depth of field, which has advantages in studio and landscape photography. For example, when using the same angle of view, on an APS-C camera you'll be able to get away with using, say, f/11, whereas on a full-frame camera you may have to use f/16 to ensure your scene is sharp from foreground to background.