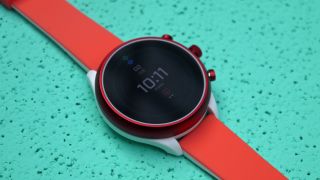 The Fossil Sport is one of the most impressive Wear OS watches yet, as well as being one of the few that use the speedy Snapdragon Wear 3100 chipset. But it’s also approaching a year old, and there are hints that a new model is on the way.

We haven’t heard much so far, but you’ll find what we have heard – and what we suspect – below. We’ll also add any additional news and leaks to this page as and when we hear them.

If anything though there’s a chance it will launch even sooner, as a watch believed to be the Fossil Sport 2 has both passed through the FCC (Federal Communications Commission) and received Bluetooth certification – two things that usually happen within a few months of release.

However, other than the fact that it exists and is likely coming fairly soon, the only things this listing revealed was the presence of 2.4GHz Wi-Fi and Bluetooth. And speaking of Bluetooth, the same model has also been certified by Bluetooth SIG (Special Interest Group), which further suggests it’s coming soon.

We can only really guess at the specs and features for now, but the Fossil Sport 2 is likely to use the Snapdragon Wear 3100 chipset. That’s the latest Snapdragon chip built for wearable devices and it’s already used by the original Fossil Sport.

You might be disappointed that there probably won’t be an upgrade here, but this is still the top-end Wear OS chipset, and it’s one that few watches yet use.

One of our biggest complaints about the original Fossil Sport regarded its GPS, because while it has GPS, it would often take a while to pick up a signal. In fact, on one occasion in our tests it took almost five minutes, which is way longer than is reasonable.

So we’d like to see this significantly improved for the Fossil Sport 2 and we’re optimistic that it will be – after all, most other wearables don’t have this problem.

The Fossil Sport is priced at the upper end of the mid-range, but with its sporty focus that puts it in a tough position, as some similarly adept competitors are cheaper, and it doesn’t have the high-end features and build of more expensive watches.

The price doesn’t need to drop much, and if enough is added to this model then we would be okay with the current price, but we certainly don’t want to see it get much more expensive.

The Fossil Sport has a reasonable screen. It’s colorful, fairly crisp, and uses OLED, but it’s not particularly bright, which – coupled with the small size – can leave you squinting.

No one wants to be doing that, especially mid-jog, so we’d like to see Fossil pump up the brightness for the Fossil Sport 2, so the screen is clearly readable even in bright sunlight.

With its aluminum body the Fossil Sport doesn’t look bad, but it has fairly large bezels, it feels very light, and it has a silicone strap.

Those last two points are handy for workouts, but we’d like the Fossil Sport 2 to be something that we feel comfortable wearing all the time, so a more premium design would help. Smaller bezels would be a start.

Speaking of that silicone strap, a simple but useful change that Fossil could make for the next model is offering other strap materials, such as leather or metal.

We don’t want Fossil to ditch silicone altogether – it’s great for working out in, but having the choice, or being able to get multiple different straps for different situations, would be good.

We were fairly happy with the two-day life of the Fossil Sport, but there’s always room for improvement, especially as two days is a fairly standard smartwatch lifespan currently, so for the Fossil Sport 2 to stand out a boost would be helpful. We’re not greedy though, we’d be happy with just a single extra day, for three in total.

One of the big features on the Apple Watch 4 is its ECG (electrocardiogram). This measures the electrical activity of your heart and can detect atrial fibrillation, making it a potentially life-saving feature.

But it’s not just Apple doing it, other companies are looking into it too, with Samsung notably rumored to be including the feature on its upcoming Galaxy Watch Active 2, so it’s a feature the Fossil Sport 2 could really use if it wants to be competitive.