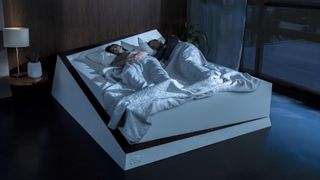 If your partner has an annoying habit of rolling over in their sleep and pushing you onto the floor, Ford has a solution: a bed that uses lane-keeping technology to keep the selfish sleeper out of your space.

Like a car detecting when you're beginning to stray out of your lane and correcting the steering automatically, the bed's pressure sensors identify when a person has strayed off their side and usese a conveyor belt to shift them back.

The bed's special revolving mattress isn't something you could pick up at the average furniture store, and the project is only a proof of concept, but it does address a serious problem that can drive couples apart (at night, at least).

In a survey by the American Sleep Council, which questioned 542 adults in the US, 26% of respondents reported sleeping better alone, and 9% sleep in separate bedrooms to get a more restful night. Women reported much more disturbance from their partner's tossing and turning than men.

“When sleeping together, many couples each have less space than a small child has in a single bed,” said Dr Neil Stanley, an independent sleep expert and author of How to Sleep Well.

“Humans are most vulnerable when sleeping, so we’re programmed to wake when something or someone touches us unexpectedly. If someone moves onto your side of the bed this defence mechanism will kick in and you’ll have a broken night, often while they continue to sleep soundly. I’ve seen it ruin relationships.”

The lane-keeping bed is part of a series of prototypes that put Ford's technology to alternative uses around your home. One previous project was a smart kennel that uses noise canceling to block out the sound of fireworks and keep your dog safe and happy during public celebrations.