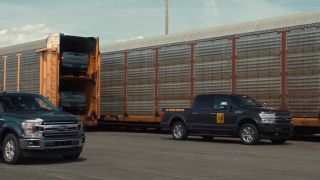 Ford is serious about electric trucks – and to prove the point, it's released a video showing an all-electric pickup hauling a load weighing over 100 pounds along a makeshift test track, set up in a railway yard.

The truck is a new prototype of Ford's classic F-150. In the clip, it hauls 10 double-decker railway freight cars containing 42 of its combustion-engine forebears (one for every year since its launch).

The load weighs over a million pounds in total and, as Engadget notes, could mean the electric truck will have a higher recommended towing capacity than its gas-guzzling counterpart when it goes into production.

While towing with an electric vehicle is certainly possible (the forthcoming Tesla Model Y will be equipped with a towbar, and there will soon be one available for the Model 3 too), few current vehicles have the battery capacity to make it practical.

The limitations of its batter mean that an electric F-150 wouldn't be able to keep towing for as long as a gas-powered truck, but this tech demo certainly seems like a step in the right direction. Commercial trucks are recognized as a major source of CO2 emissions, so a shift towards electric vehicles could make a real difference.