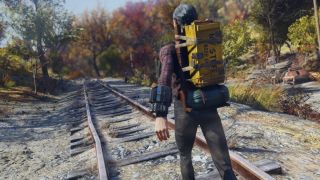 If you're still playing Fallout 76, hats off to you – after a troubled and buggy launch to Bethesda's much-anticipated online game, Fallout 76 hasn't exactly been a money-spinner for the company, despite a core community of fans who continue to play on its servers.

But Bethesda may have misstepped with its new pricing model for the game, which offers an add-on subscription called Fallout 76 1st, including new features and in-game capabilities for a hefty additional price.

When announcing the subscription, Bethesda confirmed that the "premium membership" would include "something players have been asking for since before launch: private worlds for you and select friends [as well as] a host of exclusive items and membership bonuses." Those bonuses include unlimited storage for crafting components, exclusive outfits and emotes, and 1,650 Atoms to spend in the in-game shop each month.

Players have long asked for private worlds to play solo, or with only a their own band of friends – however, not everyone has taken to the idea.

It takes a certain amount of gall – or possibly just desperation – on the part of Bethesda to attempt to monetize features that were requested all the way back at launch, especially after vocal assurances over the past year that additional content and DLC was going to be free.

Given the capital players have already put into the game, we can't see Fallout 76 1st adding much to the company coffers beyond a few dedicated fans – especially given the outpouring of criticism online.

Many are also curious as to the timing of the announcement, given it landed on the launch day of The Outer Worlds – the open-world RPG made by Fallout: New Vegas developer Obsidian – and may well push people directly to the competing game.

Dear @Obsidian + @PrivateDivision, NO idea how you hired @Bethesda to coordinate their announcements for @Fallout and #Fallout76, but the combo is amazing for helping @OuterWorlds. Seriously impressed. (Also, kudos to the Outer Worlds devs – you’re getting amazing reviews!)October 24, 2019

So Bethesda manages to get a bunch of people to pay 60 dollars to beta test Fallout 76 and provide input and research for the most requested features and are now asking those people to pay 100 dollars per year for those asked for features. That's amazing.October 23, 2019

In-game monetization is a particularly tricky subject, given the troubled use of loot boxes and pay-to-progress mechanics across both blockbuster and casual games – and some may not find the Fallout 76 1st subscription much of a burden on their finances. Either way, Bethesda has a lot to make up for in the public eye – and possibly only Fallout 5 can do it.