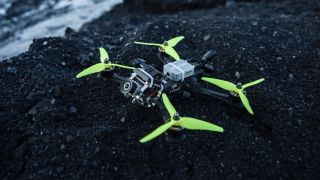 DJI is selling a Digital FPV system bundle that will let you fly any drone with their first-person, high-definition headset—provided you’re comfortable taking your drone apart first.

The manufacturer of TechRadar’s top four favorite drones, DJI claims its new FPV tech is the first ever to combine digital HD video with a low latency signal. Most FPV drone racers have hitherto relied on analog SD streams to ensure they can react to any obstacles in time, but DJI suggests its HD feed will have the “same latency” as current analog feeds.

At Calvert Vaux Park in Brooklyn, we were among the first to strap on a pair of the new DJI FPV Goggles and watch in crisp 1080p as the DJI reps flew somersaults above us. While we’ll need to test its latency performance closely, our initial impression was that the HD visuals, at least, vastly outshine any other FPV drones we’ve tried thus far.

We have all of the standard info you’ll need before buying: pricing, specs, what comes in the box, and more. But we'll also lay out exactly why flying a drone straight out of the box, DJI or otherwise, hasn't fully prepared you for installing FPV tech into your drone.

Neither of DJI’s FPV System bundles (on sale now) come with an actual drone. Unlike Parrot’s Mambo FPV or Bebop 2 Power FPV, which come with integrated FPV tech out of the box, you’re meant to combine DJI’s bundled components with your own racing drone or remote-controlled vehicle.

The Experience Combo gets you one pair of FPV Goggles, two FPV Cameras, two Air Unit Modules and assorted wires and antennas. In theory that means you can augment two of your drones for FPV flying at a time; each Air Unit creates a transmission connection between your drone, your FPV Goggles, and your controller.

Buy the Fly More Combo, and you’ll receive the Goggles, one Camera, one Air Unit, one remote controller and the same wires and antennas. This option only lets you add FPV tech to one drone at a time, but the native DJI controller can control and program parameters of the Goggles, Camera and Air Unit remotely while you fly. You technically only need the Goggles and Air Unit if you prefer your own RC controller or camera for your drone of choice.

I can see clearly now

To show just how much of a difference digital HD makes to an FPV stream, DJI started off by flying a racing drone with an analog video transmitter and had us tune our FPV Goggles to that drone’s channel in Audience Mode. Then, we switched channels on the headset to another drone powered by the DJI Air Unit.

The visual differences were immediately apparent. In standard definition, you had all of the telltale signs of a bad stream: low resolution, constant flickering and pixelation, gray lines across the screen and poor color quality. See through the nauseating low quality, though, and the frame rate and responsiveness appeared almost flawless.

In high-def, the frames per second (FPS) and latency didn’t appear to dip at all, while the visual quality improved exponentially. Individual objects and details became much more noticeable than before, and the quality didn’t drop as the pilot took the drone through a series of loops and corkscrews. In the latter half of the flight I did notice the resolution quality dipping from before, and a few rare moments of discoloration, but nothing near the issues with the analog stream.

Once the drone flew near us, I raised my arm and saw myself move almost immediately. According to the in-Goggles display, the feed’s latency vacillated between 24 and 29 ms, and this field test matched DJI’s reported average of 28ms with its “HD Low Latency FPV Transmission” tech.

Ferdinand Wolf, the Creative Director of DJI Europe, also contended that it could hit “as low as 7ms”, but we didn’t see it drop that low today. The FPV Camera has three modes built for different uses—cinematic, racing and LED—and it’s likely that the racing mode would sacrifice some visual acuity for a more rapid response time.

Overall, DJI’s reported latency is extremely competitive with the current market of FPV drones. This thorough list of latency averages from drone expert Oscar Liang indicates that DJI’s alleged 28ms average matches the average of most SD FPV cameras, and easily beats all of the current HD models.

DJI is hoping that these stats, along with the striking HD video, will convince drone racers, pro and amateur alike, to adopt its new system. Wolf mentioned that pro leagues typically can't show racers' actual feeds on TV because of their terrible quality, but that their drones' Air Units would make them "good enough for ESPN".

Powerful, customizable settings are the name of the game for this DJI system. You can choose between 1080p at 60fps or 720p at 120fps, depending on if you value sharp visual awareness or lightning reflexes during your races.

Similarly, you can choose between a 16:9 aspect ratio for the more traditional cinematic view or 4:3, which gives you a better field of view. The bundled FPV camera provides 150 degree of horizontal view, so you’re seeing plenty of the action in front of you regardless of your choice.

After this video reaches your headset, it is stored into the headset’s built-in memory, which Wolf said will come in handy if you happen to crash your drone. You can simply replay the last bit of footage to figure out where your drone landed.

All of this, of course, refers to the output from your built-in drone camera. You can also attach a 4K camera to record more high-quality content, so long as you don’t mind the extra weight. All of the drones they flew had DJI Osmo Action cameras strapped on top, and all of them flew perfectly well.

What you’ll need before you buy

Most drones with FPV in the name come with everything you need for FPV built into it. The DJI FPV System wasn’t designed to work with any individual drone or proprietary technology, with the exception of the FPV Goggles (you can’t use your own headset). The potential negative of this open source design is that there’s no shortcut for installing the FPV System into whatever drone you own, not even if you own a DJI drone like the consumer-focused DJI Mavic Air.

As the $800+ price tag suggests, these bundles were designed for drone hobbyists who not only budget out plenty of money for flying, but who also budget out time tinkering with DIY drone projects and know how to wire and solder.

Of all the drones the DJI reps brought with them to Brooklyn, none of them appeared to be recognizable DJI models. Most had exposed power distribution boards and controllers, making it relatively easy to find where the Air Unit Module can connect to a power source. The FPV System draws power from your drone, though you can also connect it to an external 12V battery if you’re willing to strap the battery to your drone and can spare the weight.

One sidenote: a DJI rep said that the FPV system only draws minimal power from the drone, and shouldn’t lessen the battery life by more than a minute. We’ll obviously have to review the difference ourselves, but keep in mind that this system will, if only minimally, lessen your overall flight time.

So along with your DJI bundle, you would also theoretically need to build your own DIY drone, or else be willing to take a retailer drone apart and void your warranty. For the former option, you’d need to buy several parts to pair it with the Air Unit, such as your own frame, motor, propellers, flight controller and power source.

You’ll also need to buy a soldering iron to fuse your Air Unit to the power board, double-sided masking tape to attach your Unit to the drone frame, and a LiPo battery to keep your headset charged.

If that sounds particularly intimidating, you should make sure you find resources online first, to make sure you know what you’re doing before you buy anything. But we do think this bundle could be a great starting point for folks that want to try out drone-building or racing.

When asked about how non-DIY drone owners should look at the DJI FPV bundles, Wolf said that they will make things “50 percent easier” to get into the hobby than if you were working entirely from scratch. He went on to say that they plan to put tutorial videos on their website at some point in the future, to help with some of the basic installation steps.

He also said he suspects that third-party drone manufacturers will build an accessory that will link the DJI FPV parts with your racing drone, no soldering required. So you can always be patient and wait for a more guided option before you buy anything.