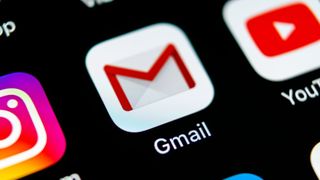 It looks like Gmail will be the next app to receive the dark mode treatment, as Google prepares for the release of Android 10 (formerly known as Android Q).

Android 10 will feature a system-wide dark mode, which will allow users to change the color schemes for all apps with a single tap. Google has already prepared dark interfaces for apps including Chrome, Google Fit and Google Pay, but until now, Gmail has been a major outlier.

However, the app's latest update (version 2019.08.18) reveals that a gloomier theme is coming very soon. If your phone runs Android Pie and you've activated night mode, you'll notice that the splash screen that appears when you launch Gmail is now black rather than white.

If you add the Gmail widget to your phone's homescreen, it will also take on a dark color to match the rest of your system. The main app remains bright and white, but that could change very soon.

The new Gmail update is rolling out now, but as XDA Developers reports, you can download the APK if you can't wait. Not sure what to do with that? Here's how to install an APK.

The latest Gmail update doesn't just provide a glimpse of a darker future – it also includes a handy feature that will be a welcome surprise if you have multiple accounts to manage.

Rather than tapping the account icon at the top right and selecting the one you want to change to, you can simply place and finger on the icon and slide up or down. The same feature has previously appeared in Google Maps and Google Drive, and although it's a small change, any change that makes emails easier to manage is a welcome one.