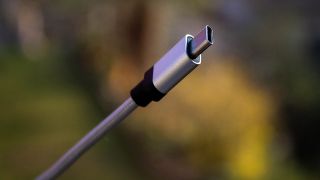 Look around you. Even with the advent of the cloud and the ubiquity of Wi-Fi replacing cables nothing beats a good old Universal Serial Bus port – or simply USB. It's ingrained in our phones, tablets, computers, game consoles, cameras and the list goes on and on.

Practically anything you own uses USB, and we've graduated to this point over the last 20 years. The USB Type-A standard, which is what we most commonly use today, saw its first public release in 1996 has grown immeasurably since then and it's even replaced ubiquitous interfaces before it (i.e. FireWire). USB has also made its way to smaller devices like our phones and tablets replacing the mess of proprietary chargers as well.

You probably know this already, though. Surely, you've used a USB thumb drive to move files around. But it's not 1996 anymore, and our technological needs are evolving.

As such, the USB Implementers Forum (USB-IF), the organization behind this universal connection started working in 2014 on a new specification, branded USB Type-C (or USB-C for short) to replace the USB Type-A port we know and love.

Promising a reversible design for versatile use across smartphones, tablets and and computers, the USB Type-C spec was conceived with slim and portable form-factors in mind. All the while, it promises to boost data transfer speeds up to an immense 10Gbps.

Not only can it transfer data faster, but USB Type-C is capable of both powering your electronics and outputting video to a compatible monitor at the same time. What's more, Thunderbolt 3 compatibility would ensure a truly universal solution, perhaps signifying the beginning of the end for mini DisplayPort.

Type-C with a Type A personality

On paper, USB-C seems like the one port to rule them all, but since it first appeared in August 2014 chinks in the armor have started to reveal themselves.

Benson Leung, a Google engineer with an uncanny USB Type-C fascination, discovered no two cables are the same despite Implementers Forum championing the new interface as 'universal'. He exposed innumerable cables and connectors on Amazon were failing to charge his Chromebook Pixel, and therefore, did not meet the specification set forth by the USB Implementers Forum. Even the official USB Type-C charging cables from OnePlus were out of spec.

This, of course, gave Type-C a bad rap. Negative public perception is the last thing a new standard needs, especially when many still don't know what USB-C is to begin with.

Worse yet, the Implementers Forum took shots at Leung for testing his own cables. USB-IF CEO Jeff Ravenscraft went as far as to tell Digital Trends that users aren't equipped to do so despite Engadget reporting that Leung had a USB multimeter to monitor wattage while performing his tests.

USB-C introduction started off slowly and was first integrated into the MacBook and Chromebook Pixel. Thenafter, the new standard came to smartphones like the Lumia 950 and Nexus handsets. However, now it's becoming an increasingly regular feature and only port on some notebooks like the HP Spectre 13 and Asus ZenBook 3.

Recent rumors suggest Apple plans to double down with the next MacBook Pro that could very well include four on-board USB Type-C ports, abandoning Type-A once and for all.

It's not a completely farfetched proposal either. Others have suggested that along with the iPhone 7, the 2016 MacBook Pro will ditch the headphone jack too, opting instead for a focus on Bluetooth and alternative cable solutions.

Historically, Apple hasn't cared much for tradition. The Cupertino company was quick to discard physical cell phone keyboards in 2007 with the release of the first iPhone and even tangible mouse buttons two years later with the Magic Mouse.

Slowly but surely, Apple's influence could incite a domino effect of inspired ideas from other hardware makers. And it's apparently already begun with Lenovo's Moto Z, which contests two birds with one stone by removing the headphone jack and micro-USB in favor of USB Type-C.

Due to the lack of USB-C peripherals from headphones to hard drives, the world just isn't ready for the new interface. People also aren't ready to replace their large collection of USB-A devices and in this way USB-C is cursed by the success of its predecessor. In effect USB-C is an inconvenient upgrade.

The problem with USB-C-equipped hardware currently is that it's not possible to ditch Type-A just yet. Unless you only need one wired peripheral attached at a time, you'll need a USB-C hub to connect multiple devices.

Sure, there's an ample collection of USB-C embellishments available for purchase, but instead of being accessories they're necessity. Let's say you need a USB Type-C external hard drive connected while you charge your device, it's impossible to do both without a Type-C USB hub.

With the default settings enabled in OS X El Capitan, you can't use Time Machine without plugging a charging adapter in. A USB Type-C external drive, then, is useless for backups on the go even if you opt for the drive from Apple's website.

While it's easy to find micro- and mini-USB to USB-C cables with a few search engine keystrokes, being limited to one connection at a time makes USB-C even less universal than Type-A, which requires only an inexpensive hub. The irony here is just how versatile the USB-IF claims it to be. Agreed it's reversible in every sense of the word, but it's far from ubiquitous, at least for the time being.

Making up for lost time

Obviously, given the obstacles it's had to overcome up to this point, Type-C has plenty of room to grow, and believe it or not, there's some indication of a light at the end of the tunnel.

Belkin, for example, is coming out with a Type-A/Type-C hybrid hub designed for use with the MacBook and Chromebook Pixel. Even though it's a tentative move clasping to USB 3.0 not to mention an expensive offering at $49 (£34, AU$74), it's a step forward at the very least. Even more forward thinking, a few companies like Aukey offer PCI-express cards for desktops, allowing for the addition of as many Type-C ports as your hardware can handle.

We can only hope that with the next MacBook Pro, Apple leads a revolution in finally letting go of the USB Type-A standard we've been inexplicably clinging to for so long. There's clearly a better solution out there for charging, transferring data and connecting peripherals, why not embrace it fully?

Sure, Google has done a commendable job urging support for the new connection with the inclusion USB Type-C on the Chromebook Pixel. But, at the same time, its failure to let go of the past is evidenced by a pair of USB 3.0 ports as well. The 12-inch MacBook, on the other hand, gives us a sneak peek of the future even if it's argued that just one port isn't enough.

It's high time we move on to an interface bearing the potential to be so much more than that one port on your laptop that requires a backpack full of adapters just to serve its intended purpose.

If USB Type-C really is the all-in-one cable of the future, the proof is long past due.