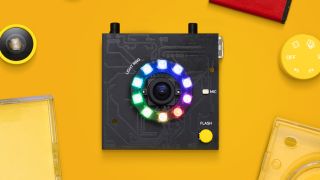 Where us long-in-the-tooth oldies had to make do with Bunsen burners, test tubes and gruesome frog dissections during science classes, the kids of today are building their own fantasy computers and learning to code applications via simple coding kits.

Kano, which raised $28 million in Series B funding last year, has rapidly become one of the biggest names in creative coding, selling a range of kits in 4,500 retail stores including Target, Walmart, Best Buy, Barnes & Noble, Amazon, and Toys R Us.

The company claims over 200,00 budding computer builders worldwide have already coded and shared more than 380,000 applications, artworks, songs and games, but it strives for more in the coming years.

A new camera kit, which was announced at this year's Consumer Electronics Show, will arrive in 2019 and allows imaginative types to create and build a five-megapixel camera via a step-by-step storybook.

Once constructed, the powerful little stills and video snapper can run a number of bespoke photo filters, colorful flashes and harness clever rules that have been created using Kano's simple suite of online software.

Better still, every kit comes with a Tripwire sensor that remotely activates the camera, opening up a world of security and remote shutter possibilities.

Unlike many of today's toys, which manage to hold an attention span of a few seconds, the Kano Camera Kit requires young minds to first plug in the parts, connect the circuits to a single-board computer brain, add a flash, trigger, battery and choose between a wide-angle, fisheye or macro lens.

Before they know it, budding Steve Jobs types have just built their first piece of technology, which then receives instruction using simple and colourful block-dragging software.

Users can create whacky filters, turn their little snapper into an action cam thanks to burst photography and even use the camera's built-in microphone to trigger the shutter with a clap or whistle.

Kano also attempts to 'game-ify' the experience with playful challenges, which set tasks for users, such as learning to make a weather station or using code to make street art, and then rewarding them with badges and special unlocks.

A successful Kickstarter campaign means the Camera Kit - along with two others (Pixel and Speaker) will arrive in 2019, retailing at $129.99 (around £100).