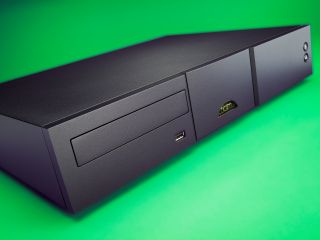 CI is big business in the US and Naim's newcomer doesn't mess about. It features a pair of 400GB hard drives in a mirrored RAID configuration (one drive acts as back-up for the other) and is said to be able to store up to 600 discs and stream up to six outputs, all at CD quality.

As the NaimNet NS01 is aimed at the CI market, it sports scalable IP-addressable Ethernet connectivity (for distributed audio systems), in addition to either DIN or RCA phono outputs for connection to more traditional hi-fi systems. However, the system requires permanent connection to a PC both to drive it, and to access the AMG music database, which is, of course, a necessity with up to 600 discs to rip.

Further features include a TV interface and the ability for savvy consumers to program suitable remote controls to drive the system. The CI-friendly NS01 is expected to be followed by a more Joe Public-friendly home server - the NS03 - by April of this year. The NSO1 is likely to cost around £3,000 upon launch.