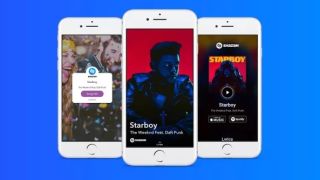 Apple is buying Shazam, the two companies confirmed today. The deal is reported to be around $400 million (about £300 million / AU$530 million), much less than Shazam's reported valuation of over $1 billion.

Apple sent a statement regarding the acquisition to TechCrunch, which was first to report about the deal on December 8. The statement reads:

"We are thrilled that Shazam and its talented team will be joining Apple. Since the launch of the App Store, Shazam has consistently ranked as one of the most popular apps for iOS. Today, it's used by hundreds of millions of people around the world, across multiple platforms. Apple Music and Shazam are a natural fit, sharing a passion for music discovery and delivering great music experiences to our users. We have exciting plans in store, and we look forward to combining with Shazam upon approval of today's agreement."

Spotify and Snapchat parent company Snap were also reportedly interested in buying Shazam, but Apple won out. All three companies have partnerships with Shazam.

Shazam is a natural fit for Apple Music. The Shazam app can recognize music, TV shows, movies and more based on a snippet of sound. It stands to reason that Apple Music will tap into Shazam's audio recognition capabilities to help users discover music more easily.

What's more, Shazam also has a feature that lets users see what top artists are Shazaming. No doubt Apple is keen to carry this over so users can connect with artists and discover new music on its service.

But two areas where Apple likely sees the most opportunity in owning Shazam are Siri and augmented reality (AR).

Considering the Google Pixel 2 can tell you what song is playing without you having to ask, Apple likely wants to bring Shazam's power of recognizing songs on the fly to the iPhone. And with the Apple HomePod launching early next year, smarter audio recognition stands to benefit Apple's broader hardware line.

Additionally, Shazam has done a lot of work in AR. The company allows brands to serve AR content to users when they scan real-world objects like posters and books with their device's camera. Apple, which has made a major push into AR with the iPhone X, iPhone 8 and iOS 11, likely envisions bringing Shazam's AR tech and services to its own devices.

For its part, Shazam says it's excited to be joining the Apple fold. The company sent the following statement to TechCrunch:

"We are excited to announce that Shazam has entered into an agreement to become part of Apple. Shazam is one of the highest rated apps in the world and loved by hundreds of millions of users and we can't imagine a better home for Shazam to enable us to continue innovating and delivering magic for our users."