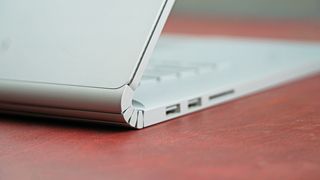 It's been quite the year for foldable devices, though actually getting them on sale has proved a struggle for companies dealing with the cutting-edge tech. Now a newly published patent spotted by WindowsLatest teases another folding gadget on the way from Microsoft.

On the back of rumors earlier this week predicting the arrival a foldable Surface device, we've got a filing with the US Patent and Trademark Office that gives us some idea about what such a device might look like.

And it looks very much like a Surface Book but with the entire laptop made up of a display screen – we're assuming that the lower half of it could turn into a touchscreen keyboard or whatever you wanted, but the patent focuses mainly on the folding mechanism.

Microsoft proposes what's intriguingly called an "exoskeletal hinge" to allow users to fold and unfold their new notebook. Besides that, the patent doesn't go into too much detail about potential uses, but does mention laptop components like processors and storage.

As with any patent, this won't necessarily end up turning into an actual product, but it gives us some idea of what Microsoft is planning – and it seems like foldable devices of some description are on the agenda.

While we've seen folding phones from Samsung and Huawei announced this year, neither has actually made it to the market yet. It seems there are a few issues to fix before we're all carrying folding phones and laptops around.

We know that Microsoft has been thinking about folding devices for ten years at least, so from that perspective this patent isn't too much of a surprise. It would seem this is separate from the Centaurus project that involves two displays with a more conventional hinge, but time will tell.

However, the display tech is now available to make these sorts of next-gen gadgets possible. Most of the big names in the business – including Google – are believed to be working on hardware with foldable screens attached.