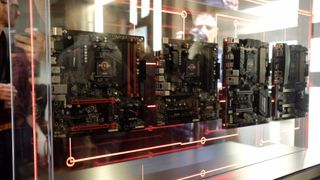 AMD will push out Ryzen 2 processors (‘Pinnacle Ridge’) built on a 12nm process as early as February next year, if the CPU grapevine has got it right.

According to Wccftech.com, Ryzen 7, Ryzen 5 and Ryzen 3 2000 series processors will arrive complete with a bump to clock speeds, as well as more overclocking potential. As mentioned, these will be 12nm as opposed to the existing Ryzen products which use a 14nm process.

The second-gen Ryzen 7 CPUs will be the first to arrive in late February according to the tech site, followed by the mid-range Ryzen 5 and budget Ryzen 3 which will pitch up in March.

These chips will offer better power efficiency, and on the performance front, core counts will allegedly remain the same, but clock frequencies should be boosted by 200-300MHz or thereabouts across the board, Wccftech.com asserts. The processors will also apparently support faster DDR4 memory frequencies.

It’s also worth noting that the chips will be compatible with existing (AM4) motherboards, so if you want to upgrade from an original Ryzen processor, you’ll be able to do so, with only a BIOS update required for the motherboard. However, there will apparently be new motherboards (sporting extra features) launching with these fresh CPUs for those who want them.

There aren’t any further details on the second-gen desktop processors at this point. Note that there’s also a story doing the rounds about new AMD processors with a Ryzen 7 sequel offering 12-cores and boosting up to 5.1GHz, but this is an entirely different rumor which has been proved to be false and based on a fake slide.

As for the mobile versions of Ryzen 2 processors, these should emerge in April, and second-generation Ryzen Pro CPUs are expected to arrive in May 2018.

Meanwhile, as we heard at the end of last month, speculation has it that Intel’s next mainstream Core i7 CPU (out next year) will boast 8-cores (with 16-threads) in order to keep pace with Ryzen’s multi-core skills.