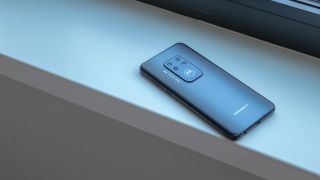 The Motorola One Macro has only just been announced, but already we’ve had a close look at what might be the next Motorola One phone, and this looks to be the first Motorola handset with an all-screen front.

Numerous images of the phone were shared by ProAndroid (a Spanish tech news site), along with a full specs list. What wasn’t shared was the full name of the phone, but the site seems confident that this is a Motorola One model rather than the Moto G8 (and the device says Motorola One on it).

The rear meanwhile has a triple-lens camera array, with apparently a 64MP f/1.8 main lens, an 8MP f/2.2 secondary sensor with an undetermined lens, and a depth sensor. The back also houses a fingerprint scanner which has a light-up ring around it that can be used to alert you of notifications.

Under the hood, this Motorola One handset apparently has a mid-range Snapdragon 675 chipset, 4GB of RAM, 128GB of storage, a microSD card slot and a 3,600mAh battery.

No pricing or release date details were included, but the specs and features suggest it could be priced similarly to the Motorola One Zoom, which is $449 / £379 (around AU$660). As ever, we’d take this leak with a pinch of salt, but it does match an earlier leak, and it certainly looks convincing.