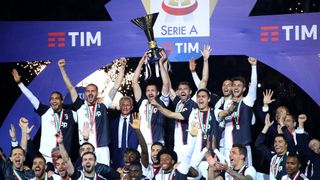 The 19/20 Serie A season so far has been nothing less than the riveting battle for the Scudetto we had anticipated. So we're not surprised that you've found your way here to discover how to get a Serie A live stream.

Big guns Cristiano Ronaldo and Romelu Lukaku have been in good scoring form for Juventus and Inter Milan respectively, propelling both sides to be the two main title challengers with Lazio running them close.

Elsewhere, Gennaro Gattuso's Napoli had been widely regarded as being title contenders for this season, but a poor run of early season form has cut them adrift, floundering in mid-table alongside fellow Italian giants AC Milan. The Rossoneri responded to their middling form by bringing in the braggadocio bandwagon that is Zlatan Ibrahimovic during the January transfer window and his return to the red and black looks set to be one of the key talking points for the remainder of the season.

Can Cagliari continue their surprise early season form? Will Roma's Chris Smalling turn out to be the signing of the season and can anyone stop free-scoring Lazio striker Ciro Immobile from ending the season as Capocannoniere winner?

You can watch every minute of the action broadcast in your region by following our guide below to getting a Serie A live stream - no matter where you are in the world.

If you're abroad and can't bear to miss out on catching the coverage from your home country of Serie A, you'll inevitably find it geo-blocked when you try to stream online. But don't sweat. With the option of a VPN, you can tune into those fixtures no matter where you are in the world without resorting to some dodgy feed on Reddit. And best of all, it's really easy to do.

A VPN is perfect for this as it allows you to change your IP address so you appear to be in a completely different location. We've tested hundreds of VPNs and can recommend ExpressVPN as the best VPN out there right now.

Express VPN is our #1 rated best VPN in the world right now, largely thanks to its smooth connections, robust security and sheer amount of international servers. Plus, it can be used in conjunction with a range of devices including Smart TVs, Fire TV Stick, PC, Mac, iPhone, Android phone, iPads, tablets, games consoles, etc. Check out Express VPN with a 30-day money back guarantee or sign up for a year for 49% off and an extra 3 months free.

ExpressVPN is super simple to operate once installed - just fire it up, select your server location and your device will think it's somewhere completely different. And VPNs are also great for staying secure online and getting around restricted websites.

How to stream Serie A live in the UK

Live coverage rights of Serie A in the UK this season are with sports subscription service Premier Sports.

The service costs £9.99 per month for SD and HD coverage if you're on Sky or Virgin Media, or £99 per year if you like the sound of its rugby union, rugby league and motorsport offerings, too. Premier Sports also has its own dedicated app which lets you watch all this action on the go.

How to watch Serie A: US live stream

In the US, streaming service ESPN+ will carry an average of nine matches live each week, while ESPN networks will televise a Serie A Match of the Week. Most of these broadcasts will air on ESPN and ESPN2, and the Match of the Week will also be available in Spanish on ESPN Deportes.

On top of this, RAI International will have the games in Italian-language via DISH and DIRECT TV.

If that wasn't enough, between 3 and 4 games will also be televised each weekend in Italian on RAI Italia, which is available through the streaming service fuboTV.

If you're outside of the States and want to tune in to ESPN+'s coverage, you can use one of our favorite US VPNs and watch the coverage from another country.

How to live stream Serie A soccer in Canada

Online sports upstarts DAZN have the rights to show live Serie A matches in Canada for the 19/20 season.

The network is offering a one-month free trial, followed by a rolling $20-a-month or annual subscription of $150. The dedicated DAZN app is available for iOS and Android phones and tablets, as well as Amazon Fire TV, Android TV, Chromecast, Apple TV plus most modern Smart TVs.

How to live stream Serie A soccer in Australia

If you fancy watching top flight Italian football in Australia, then you'll need to be a subscriber to beIN Sport who have secured exclusive live coverage rights to the league for this season.

How to watch the Serie A in New Zealand

Subscription service Sky Sport is the sole rights holders for live coverage of Serie A in New Zealand this season.

How to live stream Serie A football in India

In India, Sony Six and Sony ESPN will once again broadcast Italian football for the coming season live.

Subscribers wanting to live stream games on the move via a mobile device need to download the comprehensive SONY LIV mobile app.