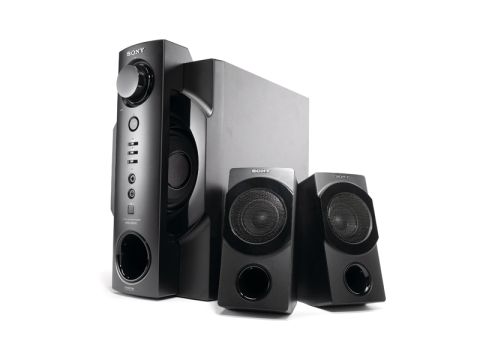 The design may put people off, but the SRS-DB500 delivers where it matters

There's no ignoring it – power up the Sony SRS-DB500 and a great ring of blue light pulsates around the multi-jog dial.

Any thoughts of subtle ambiance for enjoying films and games goes out of the window – as well as a blinding blue glow. We can only assume that either Sony got a job lot of blue LEDs, or it thinks this ultra-bright display looks good.

Elsewhere, the build quality is fundamentally lacking. The satellite speakers are large, but their all-plastic construction and feather-light build make them feel cheap and tacky. They also have thin built-in cables with proprietary connectors, so if the wires eventually short out you'll presumably be forced to send the unit back to Sony.

The subwoofer is weightier, but suffers from a similarly wobbly plastic construction. The illuminated jog wheel has a slightly rubbery feel, and the entire front bends slightly when you lift it. Sony's well known for its canny design philosophy, but the SRS-DB500 feels like something made by a cheap competitor. That is, until you hear it.

Despite their cheap plastic construction, the speakers do an absolutely blinding job of reproducing all the sounds of explosions you'll find in a modern action film or computer game. The bass is clear, the treble is just about right and they have a deep, cavernous sound that only Sony's 65 years of experience can bring. Music sounded great, too.

Despite the SRS-DB500's looks, Sony has packed a lot of useful technology into the speakers. There's a handy line in on the front for connecting your iPod or Walkman. The multi-jog wheel lets you customise the bass and treble to your heart's – and your ears' – content. There's also an infrared remote control for adjusting the settings from afar.

A possible explanation for Sony's design is found in the packaging – they seem to be targeted at gamers above all else. But once you get past the looks and build quality there's a lot to like here, whether you're into games or not.