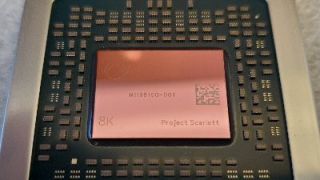 The new Xbox Series X and PlayStation 5 are expected at the end of 2020 and, with the suspected upgrades to the internals of each system, they could consume a sizable chunk of market for SSDs and graphics DRAM, TrendForce suggests.

The Xbox One family and the PlayStation 4 come with a bit of GDDR5 VRAM and traditional hard drives. The PlayStation 5 and Xbox Series X are expected to make some upgrades in that regard, with a shift to SSDs and GGDR6. The VRAM is also believed to reach 16GB in capacity, double the 8GB of GDDR5 found on the original models of the current-generation consoles. The SSDs, meanwhile, are expected to reach at least  512GB or 1TB in capacity.

All of the VRAM and flash storage going into these next-gen consoles will mean a lot of demand surging all at once. TrendForce believes that by the end of 2020, Sony's and Microsoft's consoles will account for 3 to 5% of all SSDs shipped globally in 2020. Those numbers are expected to go even higher for 2021.

The PlayStation 5 and Xbox Series X are going to be powered by AMD hardware, with Zen 2 architecture leading the way. They'll make up a chunk of the demand for graphics DRAM later this year, but Nvidia is also expected to playing a part in the demand.

Trendforce suggests Nvidia's next-generation Ampere graphics processors could start taking up some of the DRAM market in the second half of the year. That prediction would line up well with recent rumors that suggest Nvidia Ampere will be revealed in March.

That will certainly mean even more demand for graphical DRAM, but we'll all be lucky if one more player raises the deamnd even higher. Competition is a good thing, and there hasn't been enough of it at the high end of the graphics card market. But, a high-end Navi card may be coming, and it could compete with Nvidia's best offerings (unless Ampere proves a serious uplift) while also consuming just that much more of the DRAM market.