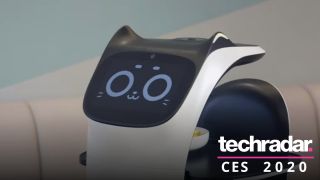 Chinese indoor delivery robot specialists PuduTech have revealed two new robots at CES 2020: BellaBot and HolaBot. The former is designed to deliver up to four trays to a table, while the latter is meant to be deployed for clean-up scenarios. But never mind any of that: BellaBot has been designed to look like a cat.

The cat appearance looks like more of a novelty angle than anything, but interactions with the unit will prompt different expressions. BellaBot will act pleasantly if you touch its ears, but if you do it too many times, it'll get 'mad' that you're distracting the robot from the job it's supposed to be doing.

That tallies fairly well with real cat behavior (although a real cat would probably attack you if you're being too affectionate).

The manufacturers boast about BellaBot's precise positioning and navigation ability. It's designed for restaurant owners in China who are short on waiting staff, according to the BBC. PuduTech will have a 'Future Restaurant' installation at CES where visitors can see BellaBot and his less exciting sibling HolaBot in action.

BellaBot is the successor to the existing PuduBot, which already has a little face, but crucially isn't a cat. The company says its delivery robots are already found in over 2000 restaurants worldwide. The main lingering question here, then: are you supposed to tip the cat?

CES is primetime when it comes to novelty robots that aren't necessarily designed for everyday use. If you want to find out about robot postmen, or even a robot that brings you toilet paper, this is a magical time of year.