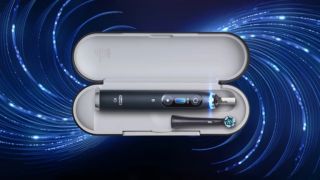 While CES is well known for showcasing the latest developments in audiovisual and computing tech, there’s always plenty of gear outside these areas on display – and even something like a toothbrush can create buzz at the annual Las Vegas trade show.

This year, Oral-B is using CES to introduce its latest ‘smart’ electric toothbrush, the iO, which is a bit different from its previous offerings. The oral hygiene brand claims the iO is the culmination of six years of product research and development, with input from 1,800 consumers and over 250 patents from around the world.

Aside from the redesigned brush head, which we’ll get to below, the iO’s headline feature is an accompanying app that uses AI to provide users with real-time “tracking and coaching” – complete with a 3D guide informed by thousands of recorded brushing sessions.

If using a smartphone app in the bathroom is too fraught with danger for you (or just too much effort), the iO has its own integrated smart display that lets you switch between seven brushing modes, and, according to Oral-B, “greets users, while also providing coaching and motivation”.

While the smart tech may sound a little complicated, the physical design of the brush looks quite straightforward, with just two buttons and the smart display. The latter will count up to the dentist-recommended two minutes and, if you need some extra motivation, will both smile and wink if you’ve done a good job.

As with most of Oral-B’s other electric brushes, the iO also features a pressure sensor that lights up red when users are brushing too hard – although here, you’ll be shown a sad face on the smart display too. When you’ve got the pressure just right, the light will remain green and the smart display will smile.

The actual toothbrush head features a frictionless magnetic drive, which the company says will distribute energy more efficiently to the tips of the bristles and provide a smoother, quieter cleaning experience.

The brush uses “oscillating and rotating” motions, along with “micro-vibrations” that promise to give you that fresh from the dentist feel.

In their clinical test of the new tech, Oral-B found iO users had six times more plaque removal from the gumline and 83% of gingivitis patients moved from having gums classified as ‘unhealthy’ to ‘healthy’ in eight weeks.