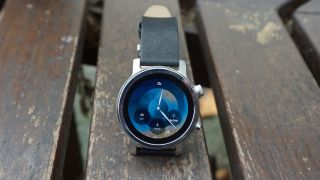 You can now pre-order the new Moto 360, if you live in the US, ready for it to land on your wrist in January next year.

We don't currently know when you'll be able to pre-order the watch from other markets, but we do know it's definitely coming to the UK and Canada in the near future - it's just unclear when that will be.

The latest smartwatch to sport the Motorola branding comes with Wear OS software onboard, as well as a variety of features you'd expect from a modern piece of wristwear including GPS, internal storage and the top-end Qualcomm Snapdragon Wear 3100 chipset powering it.

Originally we were told pre-orders for the watch would be open in November, so spotting the watch now listed on the US site is encouraging news for those who want the device as soon as possible.

The new Moto 360 isn't made by Motorola this time, unlike the previous two Moto 360 smartwatches. A company called EBuyNow have licensed the branding to make the new device.

If you live in the US, you'll be able to pre-order the watch here now. Those who don't will have to continue to wait until pre-orders are live.