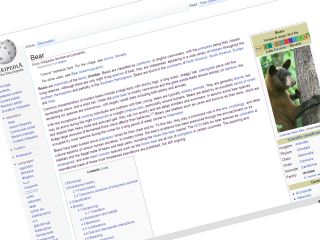 Hope you're not doing a pub quiz tomorrow night...

Some had levelled criticism against the site for blocking non-US users who have nothing to do with US policy as well as American internet surfers.

Wales told the Telegraph, "The general sentiment seemed to be that US law, as it impacts the internet, can affect everyone.

"As for me, what I am hoping is that people outside the US who have friends or family who are voters in the US, will ask them to make a call to their senator or representative, and I hope we send a broad global message that the internet as a whole will not tolerate censorship in response to mere allegations of copyright infringement."

It's a fair point; whatever passes in the US will affect huge swathes of non-US web users, as well as providing incentive and inspiration to governments in other countries around the world.

What's more, the bill promises to seek court orders against websites outside US jurisdiction – making the issue a global one.

The Stop Online Piracy Act has already met with opposition from the Obama administration, but the black-out will go ahead regardless.

Wales cited one UK Wikipedia user known only as The Yeti, who said: "This belief that the world's most powerful nation has the right to censor anyone on the planet and extend its laws anywhere it wants just because someone in the US doesn't like something is more than worrying.

"It's a thin edge of the wedge… One day's inconvenience is nothing."

Wikipedia will be offline from 5AM GMT on Wednesday 17 January until 5AM GMT on Thursday 18 January. So, better find out where the apostrophe came from, what puce is and everything there is to know about the Age of Enlightenment now to tide you over.