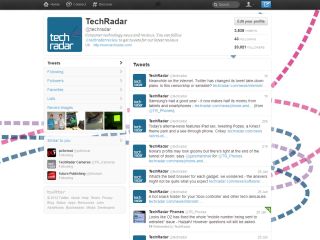 Twitter can now take down a tweet in one country while leaving it available for the rest of the world to peruse at leisure.

"Censorship!" screamed the more excitable members of the media. "It's SOCIAL SUICIDE!!1!"

But cool your jets and consider: over 250 million tweets are posted each day and much as I like to think that everyone on the internet is a decent sort of chap, I've been on YouTube so I know this isn't true.

It doesn't seem fair for Twitter to be drawn into huge legal battles that will cost the free service millions of pounds because some people have used it to do bad stuff. And by bad, we mean illegal because Twitter's only taking down tweets that are actually illegal in a specific country.

To punish Twitter for what its users say is like making the whole class stay behind because whoever put a drawing pin on the teacher's seat won't own up.

What's more, Twitter is a free service. None of us pay for it, and it's struggling to make money as it is, so if this new granular process will save it from buckling under the weight of IP lawsuits and the like, then that's a good thing.

So I'm all for Twitter being able to geographically remove tweets when they infringe on copyrights and break laws in some countries but not in others – and you can scream censorship all you like, but keeping the tweets available elsewhere, notifying users, explaining why and making it clear that a tweet has been removed doesn't sound like straight up censorship to me.

Perhaps Twitter's mistake was in not making it clear exactly how and when tweets will be taken down.

I spoke with a representative of the company who explained that takedowns will only happen in reaction to valid legal process: "we won't do anything proactively".

That's where Chilling Effects comes in – you can easily look through the cease and desist orders sent to Twitter, see what tweets they're in reference to and specifically why it's been requested that they be taken down. So if you're concerned about this specific kind of "censorship" you need to look at the rights' holders and their motives, not Twitter's.

Twitter also confused the issue a little by saying, "[Some countries], for historical or cultural reasons, restrict certain types of content, such as France or Germany, which ban pro-Nazi content."

It was fair to assume that pro-Nazi tweets are going to be removed in Germany and France because they're legally banned, so how will Twitter police this? Short answer: it won't. We asked if there was any automated filtering and received the following response:

"We will not do any proactive filtering or moderation of content. We will only respond, reactively, to a valid legal request."

So that satirically pro-Nazi joke you're about to make will, theoretically, be available in Germany until a legal request is made for it to be taken down.

Some companies may well be out to get you – but Twitter isn't one of them. It has proven time and again to be on the side of free speech and on the side of its users.

Crying censorship may make life a bit more exciting and accusing Twitter of social suicide sure makes for a nice sibilant headline, but it's just another storm in a teacup.