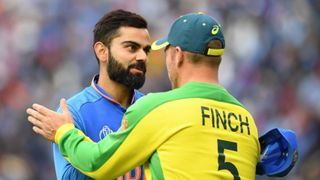 We think it's fair to say that India don't really expect to be given spankings like the one that Australia dished out on Tuesday. To see if they can respond in kind in the 2nd cricket ODI today, you can follow our guide to getting an India vs Australia live stream to watch all the action - no matter where you are in the world.

255 never quite looked like enough at Mumbai's Wankhede Stadium, but nobody could have expected captain Aaron Finch and the awesome David Warner to knock it off with a comfortable 74 balls remaining. This was a huge statement of intent from the Aussies.

India vs Australia ODI series- where and when

The dates, times and venues for the three-match ODI series are as follows:

Each match starts at 1.30pm IST local time. So that's a 7pm AEDT start for the Aussies or 8am GMT.

Now the home side will be wanting to atone for both that loss and the defeat overall in the teams' thrilling five-match series in India back in March last year prior to the World Cup.

While India's top order looks imperious, their options further down the team sheet look like a weakness likely to be exploited by the Australians unless they improve. The home side will also need to make do without all-rounder ace Hardik Pandya who faces an extended period on the sidelines recovering from a back injury.

While India have played plenty ODI cricket in recent months, this series marks Australia's first taste of the format since last year's World Cup. Like their opponents, the Aussies will be missing a key all-rounder, with Sean Abbott suffering a side strain.

Follow the instructions below to find out how to grab an India vs Australia live stream from pretty much anywhere on Earth.

Live stream India vs Australia from outside your country

In India, Australia, the UK,  or New Zealand and looking to find out how to watch the ODI matches between India vs Australia? We've got all the details about the broadcaster with the rights to show the series in your region below.

How to watch the cricket series in India

Star India and, in particular, Star Sports 1 is the official broadcaster of the ODI series on TV.

Coverage is set to start each day the series at 1.20pm IST local time.

For cricket fans in Australia looking to watch their side's tour of the sub-continent, Fox Sports and the Kayo Sports streaming service will be on hand with live coverage of India vs Australia, with the coverage starting at 7pm AEDT each day.

How to stream India vs Australia live in the UK

You need to have Sky TV in order to watch the games in the UK, but they're not on the traditional Sky Sports channels. Instead, Indian broadcaster Star has the rights with coverage starting at 7am GMT with a live pre-show followed by the match itself at 7.50am GMT each day of the series on the Star Gold channel, which is available on any standard plan.

Sky has snapped up exclusive rights to show India's matches against Australia in NZ, with Sky Sport 2 the channel the action to head to for your ODI fix.

Coverage of the Test series is due to start each day at 9.20pm NZST.